The Portland economy has been expanding year after year putting this little big city on the radar for many businesses. The first half of 2019 was no exception, setting the scene for what the future office market might hold. Tenants relocating, construction in full swing, downtown parking  becoming increasingly scarce, the seemingly nonstop traffic, and the steady demand for downtown Class A office space.

Overall vacancy as of mid-year, (combining lease and sublease) increased to 7.82% compared to the 4.90% in 2018 due to large vacancies in the suburban Class A mar-ket. In a market like this one or two large vacancies can have a significant impact on overall vacancy rates. To that point 2211 Congress Street at 200,000 SF of available space and 225 Gorham Road at 72,000 SF of available space largely attribute to this increase in vacancy. Despite the large vacancies to fill, overall vacancy is still relatively low considering that the last time overall rates were close to 8.0% was in 2007 at 7.15% (excluding 2018 rates). We anticipate seeing several downtown companies flee the downtown market due to the space crunch in the Class A market, lack of parking and scarcity of large floor plates.

Overall downtown vacancy has increased slightly to 5.38% from the 4.90% in 2018. Breaking down by submar-ket, Class A vacancy has increased to 3.25% compared to the 1.04% in 2018. Again the devil is in the details with regard to the noted “increase”. In 2018, Stonecoast master-leased 42,000 SF of space for anticipated expansion de-mands. Until all that space is needed, they are subletting some of that space(likely on a short-term basis). This sublet space is likely not an option for tenants looking for long-term deals. Class B has decreased from 8.59% in 2018 to 6.81%. Vacancy rates in the Class B market still remain healthy, however we are seeing spaces stay on the market for longer periods of time which is a bit concerning. Finding downtown Class A space over 8,000 SF is continuing to be extremely rare. Large floor plates in both the Class A and Class B downtown markets are difficult to find and fill very quickly many times with multiple interested parties.

Overall suburban vacancy is the highest it has been since 2010 at 9.77% largely due to Class A buildings becoming vacant bringing the overall Class A vacancy to 16.16%. WEX (225 Gorham Road) relocating, leaving over 72,336 SF vacant, and Unum (2211 Congress Street) leaving Home Office I creating 207,883 SF of vacant space. It is rumored that two deals gave already been signed for 2211 Congress Street. These two vacancies alone account for about 65.30% of the suburban Class A vacancy and 49.70% of all the suburban market vacancies. In the Class B market, overall vacancy increased slightly to 4.33% from the 3.17% in 2018 with the two-story building on One Davis Farm Road in Portland becoming vacant bringing 48,897 SF available for lease. 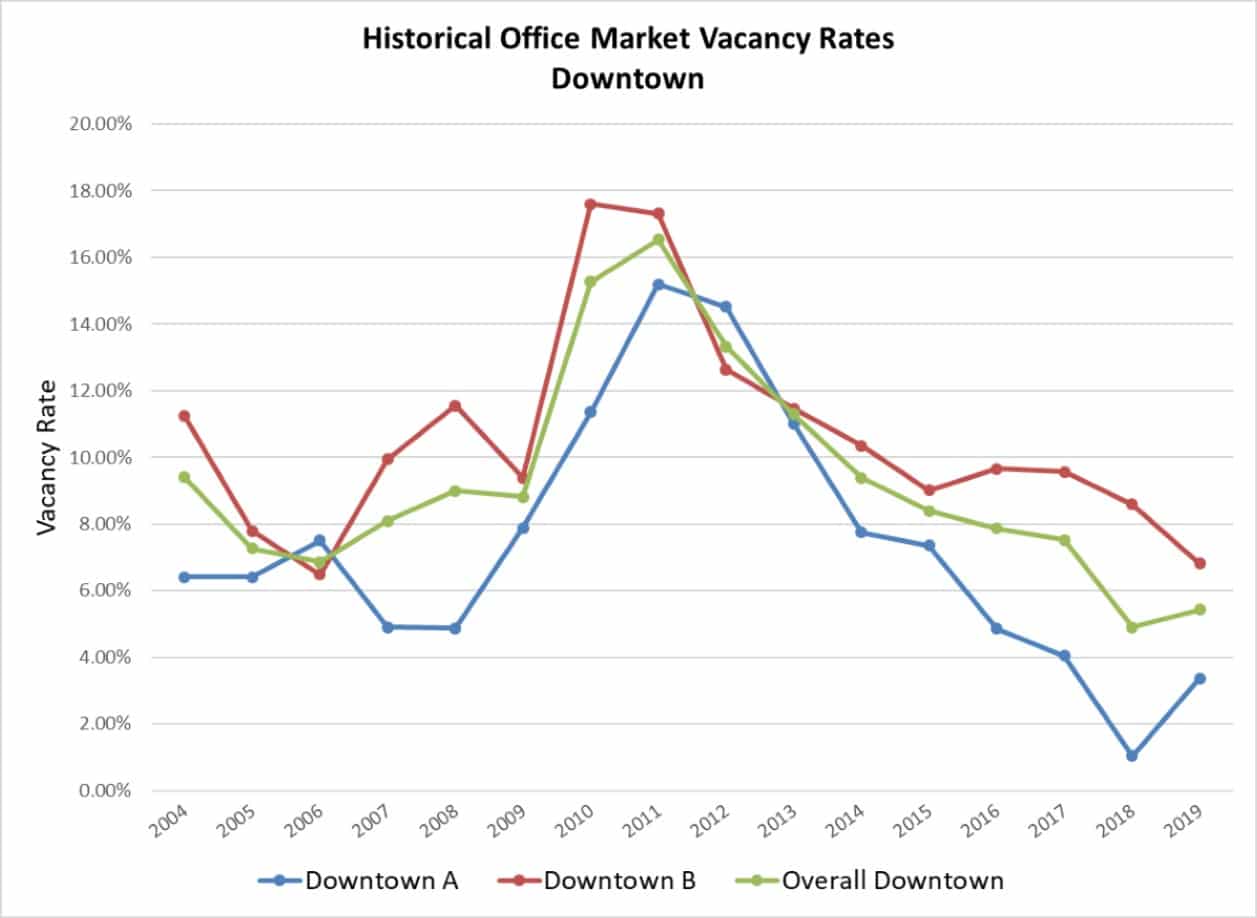 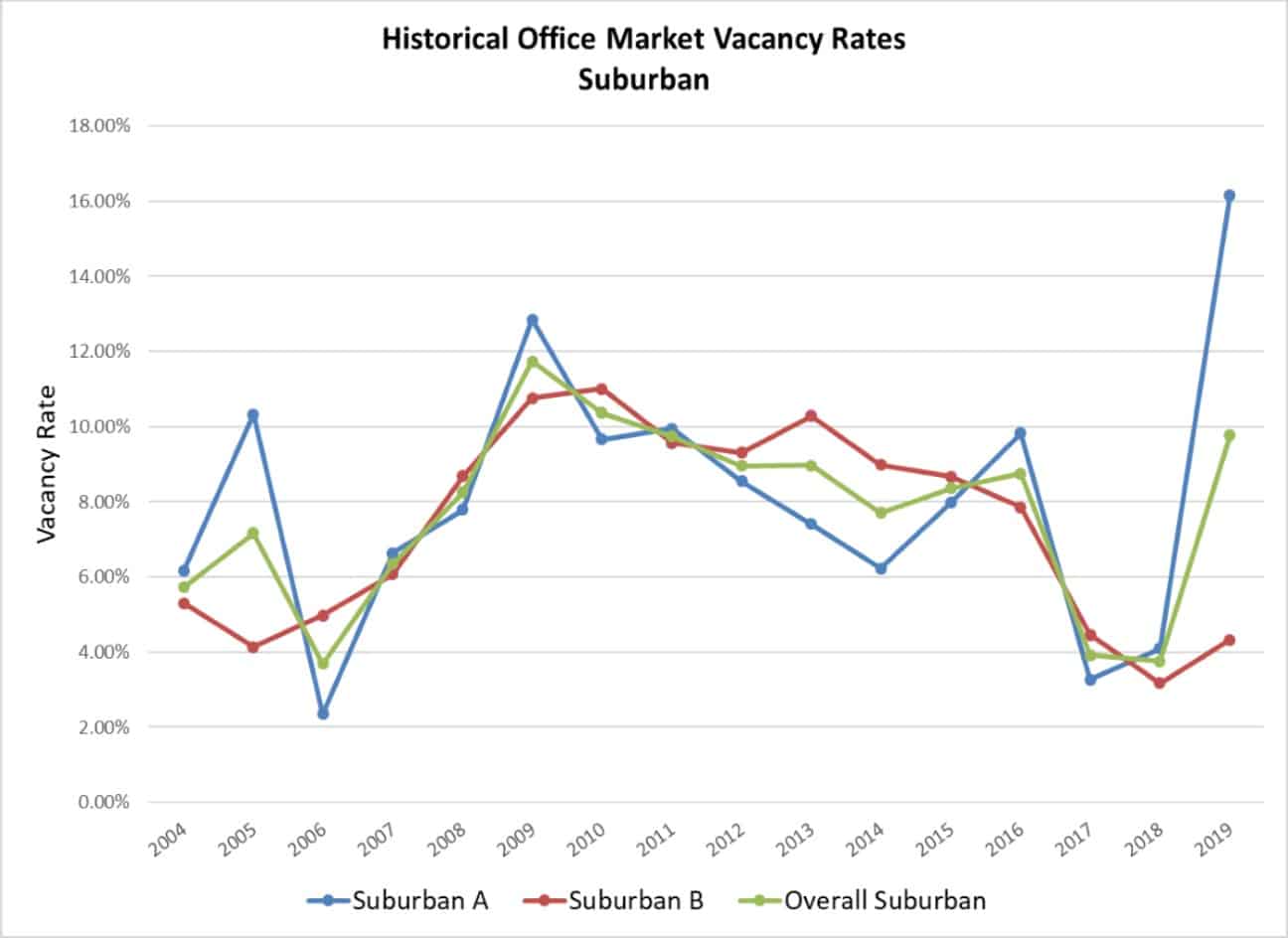 Construction and future office buildings, as part of larger mixed use projects continue to be on the rise in Greater Portland. We are seeing most new office construc-tion take place in the downtown market through a number of new and upcoming projects. 12 Mountfort Street, the former Shipyard brewery, is set to be the Covetrus headquarters with 140,000 SF of office space accompanied by a 72,797 SF Hotel and a separate 9,060 SF of residential. 100 Fore Street is set to add a 70,000 SF of office space to the market with a three-floor parking garage. The old Portland Press building on 385 Congress Street is set to be devel-oped. This could potentially add 100,00+ /- SF of new Class A office space as well as retail, hotel, residential space, and a parking garage to service the building. All these projects fall in various stages of the overall planning process ranging from conceptual plans to permitted and approved projects.

North River IV, the developers who bought One and Two Portland Square four years ago for $66M, submitted a master plan a few months back. The plan includes two large buildings to be built on the existing parking lots of the One and Two Portland Square buildings. The plans include 290,000 SF of office space, 35,000 SF of retail space, 76 apartments, a 135-room hotel, and multiple levels of parking for 1,336 vehicles according to Randy Billings of the Portland Press. Many factors need to be taken into consideration with a plan like this.

With Portland growing so rapidly, it will be interesting to see where this proposal goes and how it could affect the economy.

Parking continues to be an increasing concern whenever a tenant is searching and/or renewing for downtown office space.

• Most office tenants have at least 10-20 employees who commute to work that need 8-hour parking 5 days a week. Playing musical chairs with every 2-hour maximum parking meter is not an ideal situation. Downtown parking availability can sometimes make or break a deal.

• The current scarcity of parking is driving some tenants to look towards the suburbs for office space. Eventually the high demand could drive downtown rates up.

• Monthly parking rates are as much as $185 per space per month with almost no spaces available. Downtown garages have a 3+ year waiting lists.. Given the supply, even paying a high premium won’t guarantee a monthly parking spot.

*The data gathered in this survey excludes some shadow space, medical office, buildings under construction, and some mixed-use buildings. Towns included in this survey are Portland, South Portland, Westbrook, Scarborough, and Falmouth. In addition, the definition of Class A and Class B building used in this survey may vary from other market surveys.

For the full report published on September 10, 2019, please visit https://www.malonecb.com/reports.

Nick Malone did a summer internship at Malone commercial Brokers for the 2019 season. Nick is currently a student at Bentley University studying Economics-Finance and will graduate in the Spring of 2021. Nick is the son of Mark Malone, Partner, Malone Commercial Brokers.