A bright economic future is on Maine’s horizon 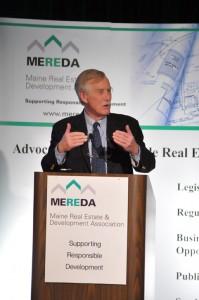 PORTLAND, Maine (January 23, 2013) – The economic forecast for Maine is looking bright according to experts at the Maine Real Estate & Development Association’s (MEREDA) annual Forecast Conference today in Portland. The day-long event featured a welcome address from Sen. Angus King and nine forecast presentations about which areas of Maine’s economy are expected to grow in 2014, all in front of a standing room-only crowd gathered in Portland.

“The data we’ve tracked suggests the greater Portland industrial market has fully rebounded from the recession. We’re seeing historically low vacancies and increasing lease rates,” said Justin Lamontagne, a broker with NAI / The Dunham Group who gave the Southern Maine industrial forecast. “For the first time in years, there is a shrinking divide between buyers and sellers making deals easier.”

The outlook for Bangor is equally positive, according to Tanya Emery, the City of Bangor’s director of community and economic development. “Mixed used development in Bangor is hot,” Emery said. “With major developments in retail, hospitality and healthcare, Bangor’s growth is no surprise as the city continues to offer great return on investment as a value market with even more growth potential. And, as inventory shrinks, we expect to see strong opportunities in Hampden, Orono and surrounding areas.”

Additionally, the Augusta area is seeing some growth, “though will continue to see high vacancy rates for office space. The opening and Maine General is expected to attract additional growth and development,” said Chris Paszyc of CBRE | The Boulos Company.

In Brunswick, Paszyc notes that the industry is “seeing a great deal of creativity to make things happen,” which, coupled with strong out-of-state investment, prove optimistic for the region, noted Paszyc.

“Lewiston Auburn is seeing growth in multi-use properties. In particular, there is a move afoot for second floor development, investment from out-of-state, and franchise development and redevelopment,” said Paszyc.

Drew Sigfridson, partner and managing director at CBRE | The Boulos Co., and president of MEREDA, noted that the statewide growth is thanks to an uptick in Maine’s real estate industry overall, including increased home sales and residential construction, as well as larger commercial leases and sales.

“This is a step in the right direction for Maine – and is just the beginning,” said Sigfridson. “Residential construction will likely lead to even more home sales – which are already on the rise. We also see tightening of office and retail space in downtown markets.  That spurs commercial construction projects. Additional new construction will be a big relief for the state’s economy.”

The event also featured a member showcase, component and many top awards were bestowed. All told, more than 700 professionals from Maine’s top industries were in attendance. 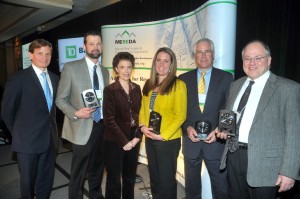 About the Maine Real Estate & Development Association
The Maine Real Estate & Development Association (MEREDA) is a nonprofit entity whose members banded together in 1985 to present the views of the state’s real estate industry to lawmakers in Augusta. MEREDA’s mission is the same today as it was at its founding: to promote fair and responsible development and ownership of real estate throughout the State of Maine. MEREDA’s more than 270 members firms employ thousands of Maine citizens and drive a huge percentage of Maine’s economic activity.

This entry was posted in Events, Media, People. Bookmark the permalink.