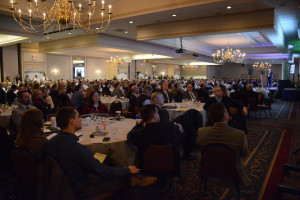 MAINE — The Maine Real Estate & Development Association (MEREDA) hosted a record-breaking 800 attendees earlier this month for the group’s annual Forecast Conference, where about a dozen experts reviewed Maine real estate trends from 2015, and predicted what is in store for 2016. The event, which also included a robust business showcase and was sponsored by TDBank, proved to be a veritable who’s who of development in Maine. Attendees listened with rapt attention and celebrated the market’s return to pre-recession, 2006 levels.

“It was a great turnout for our signature event, with a great outlook for the Maine commercial real estate market,” celebrated Michael O’Reilly, MEREDA board president and senior vice president with Bangor Savings Bank.

Justin Lamontagne of NAI The Dunham Group, along with other experts in the southern Maine office, industrial and retail markets, called for more inventory, noting that businesses seeking prime locations in have found nowhere to go. Lamontagne predicts this situation will likely to persist until new development occurs. For instance, increasingly, industrial space is being used for brewery operations. And, Class A office space in downtown Portland, which saw two record value transactions in the first part of 2015, is scarce due to high desirability; as a result, the market for nice Class B office space is tightening.

Juxtapose that with a prediction that a dearth of construction workers could potentially drive up costs of new construction, and Maine’s real estate insiders are expecting values and demand to stay high through the coming year.

Portland’s lifestyle accolades are driving high occupancy levels and rates, and not just for hotels, which have been popping up all over the waterfront and city center. Multi-family developments and single family sales in southern Maine are “very hot,” according to experts. In particular, David Marsden, realtor with Bean Group, noted that the luxury home trend is waning for both millennials and baby boomers, while the demand for smaller footprint, urban, more conscientiously built properties is on the rise.

Vin Veroneau, president of J.B. Brown & Sons, recently announced a five-story market-rate development in Portland at the former El Rayo location, which will include street-level commercial space and 63 apartments above. Veroneau, who also led development of downtown Portland’s relateively new Courtyard Marriott, was part of a video at the conference, during which he ticked off another four or five urban projects planned by fellow developers.

Tanya Emery, director of economic development for the City of Bangor, said that “the sure bet” in her city is medical office facilities. This sentiment was also echoed by an expert from the Central Maine market, where a Chinese medical tourism facility is planned for a former Auburn shoe shop, and more traditional medical facilities are in the works as well.

Emery even hinted that there’s an exciting new tenant on tap for the space being vacated by L.L.Bean’s call center later this year.

Beyond medical, experts outside Portland also see growth opportunities in senior housing, as well as entertainment and industrial space located in close proximity to the state’s turnpike and Route 95.

Lamontagne announced that FedEx is taking over the full 250,000 square feet in Biddeford formerly occupied by Hostess’ bakery operations, and Karen Rich of Cardente Real Estate announced many new retail locations in the works, including a new Reny’s in Windham.

Individual presentations from each expert can be found on the MEREDA website at:https://www.mereda.org/pasteventmaterials.php.

“We are optimistic about commercial real estate in Maine for the coming year. Many of the promising accomplishments of 2015 continue to trend upward as we enter 2016,” said O’Reilly.

Next, MEREDA travels from Portland to Bangor to host a conversation about preserving shorefront value. The event takes place over breakfast on February 10 at the Hollywood Casino. Tickets are available athttps://www.mereda.org/eventdetail.php?ID=667.

This entry was posted in Business, Events, Media, People. Bookmark the permalink.