As the market began recovering in 2010, the combination of higher inventories of foreclosed and low cost homes, historically low interest rates, and income growth outpacing home prices led to a brief two year time frame, 2014 – 2015, when buying a home became affordable at median income.  After 2015, the gap between income and median home prices narrowed and home buying returned to being unaffordable. 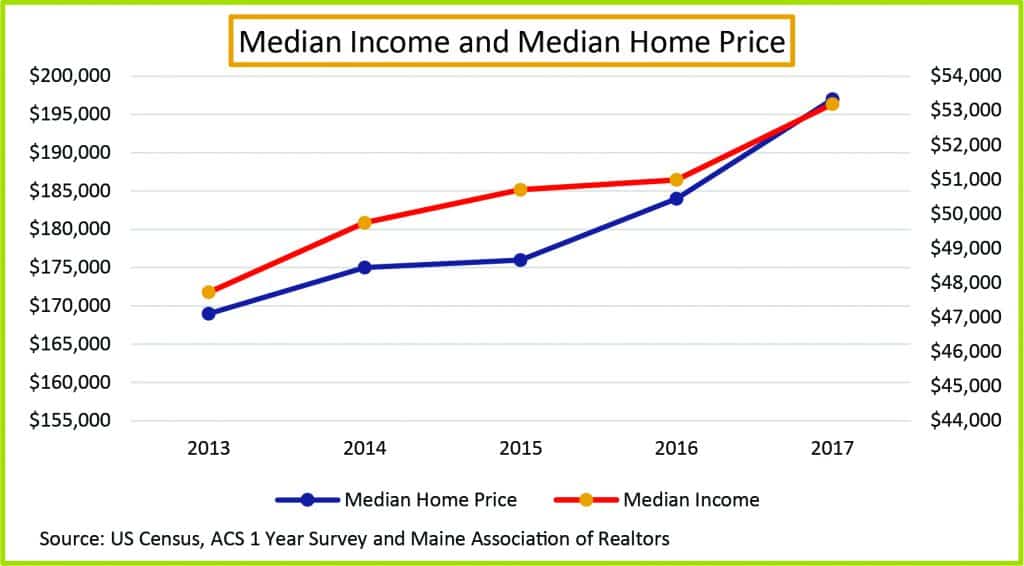 High demand and low inventory pushes up home prices.  The current dearth of new construction and the increased use of single-family units as rentals (12% increase) combined with a declining population and slowing in-migration, have contributed to slower household formation and low inventory.  Additionally, many of the single-family homes being rented were those of owners who were underwater or in negative equity.  Though increasing home values and sales prices have lessened that issue, many owners may have kept the property as a rental because demand for rental units remained strong.  The average days on market in Maine has gone from 78 in 2013 to 35 in 2017.  Based on current sales rates, there is about 6 months of inventory available.  As we move from spring to summer that inventory will likely decrease. 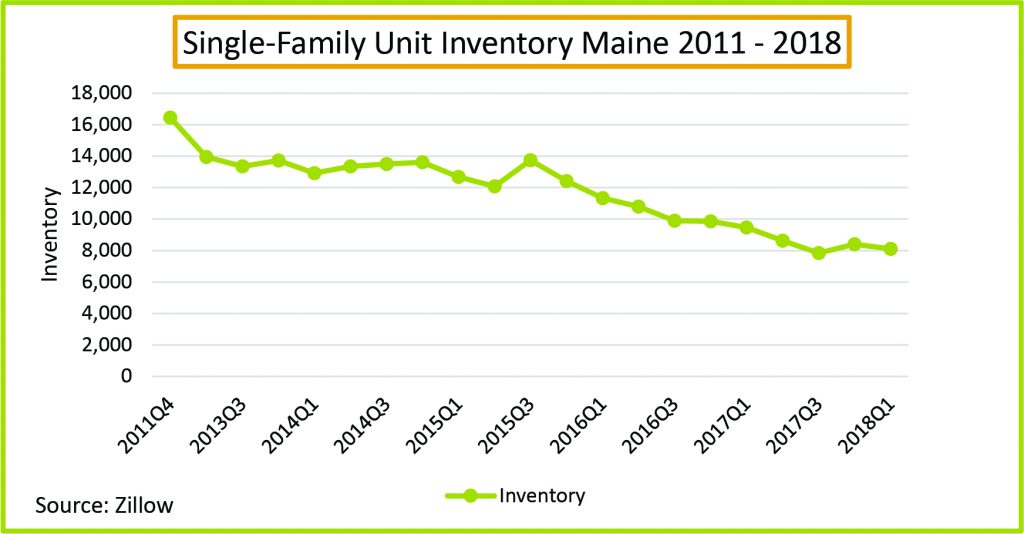 Maine’s homeownership rate, among the highest in the nation has been declining since the peak of the pre-recession housing boom.  The decline in vacancies has been less steady but took the most considerable one-year drop from 2016 to 2017 when vacancies reached a 12 year annual low of 1.2 percent. 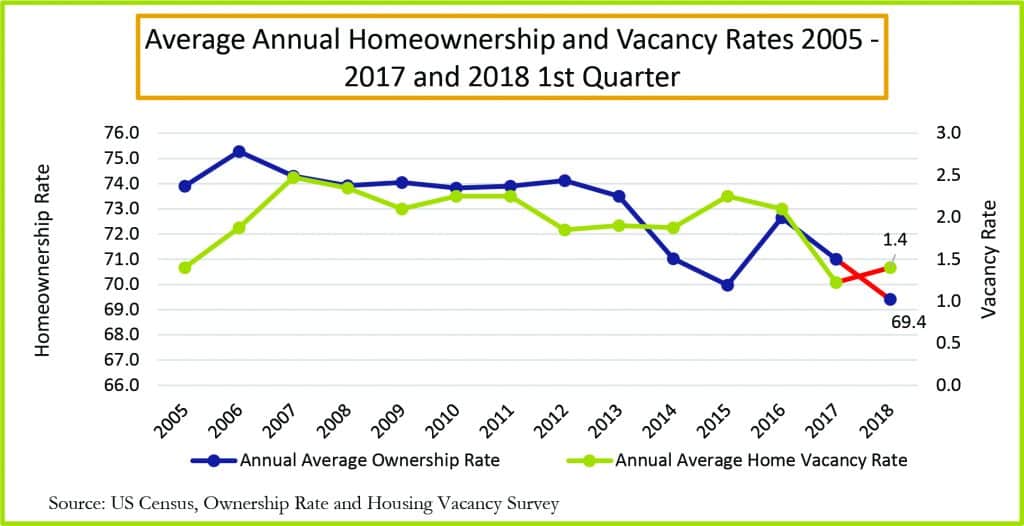 Increasing costs of land, building materials, and labor are driving the cost of new single-family development upward putting many of the new units out of reach for first time home buyers.  This trend will likely force younger buyers who do decide to buy to purchase existing homes as opposed to new regardless of the financing program. 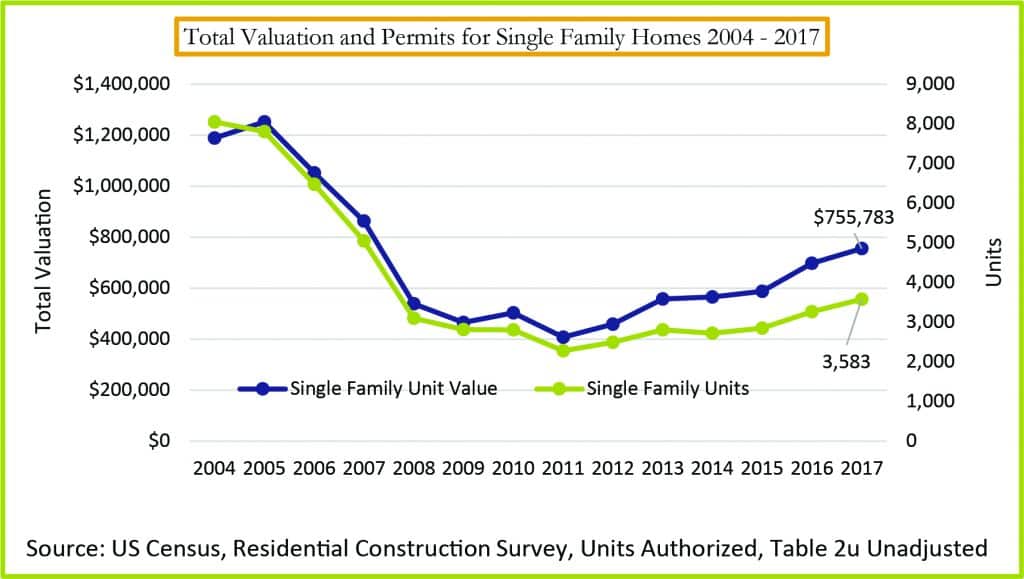 The Shift to Renting Continues

Current flat homes sales in Maine may be due, in part, to the continued shift to renting.  Households 64 and younger continue to rent in increasing numbers.  Those households in the 25 to 54 age cohorts have historically bought homes at greater rates than other age groups.  For households 25 to 34, continuing to rent is attributed to high home prices, student debt, and the locational preferences of younger Maine residents. 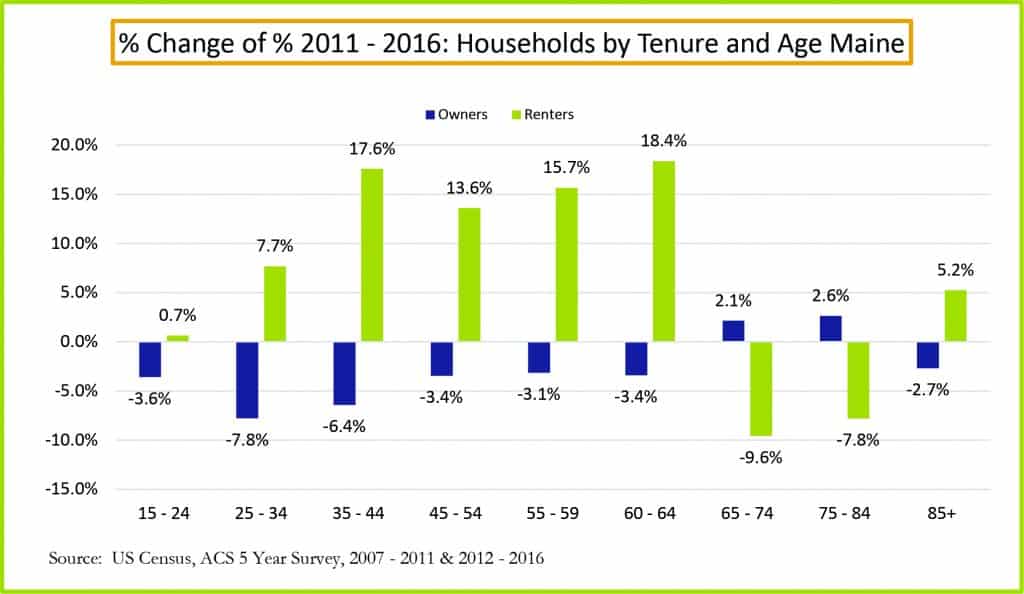 Renting Is Still Unaffordable but Improving

The rental affordability index measurement is based on the ratio of a 2-bedroom rent affordable at median renter income to average 2-bedroom price.

In 2017, renting an apartment remained unaffordable but the statewide index score improved to .88 up from .85 in 2016. The improving affordability index score is due primarily to a leveling off of average two-bedroom rents and improvements in renter incomes. 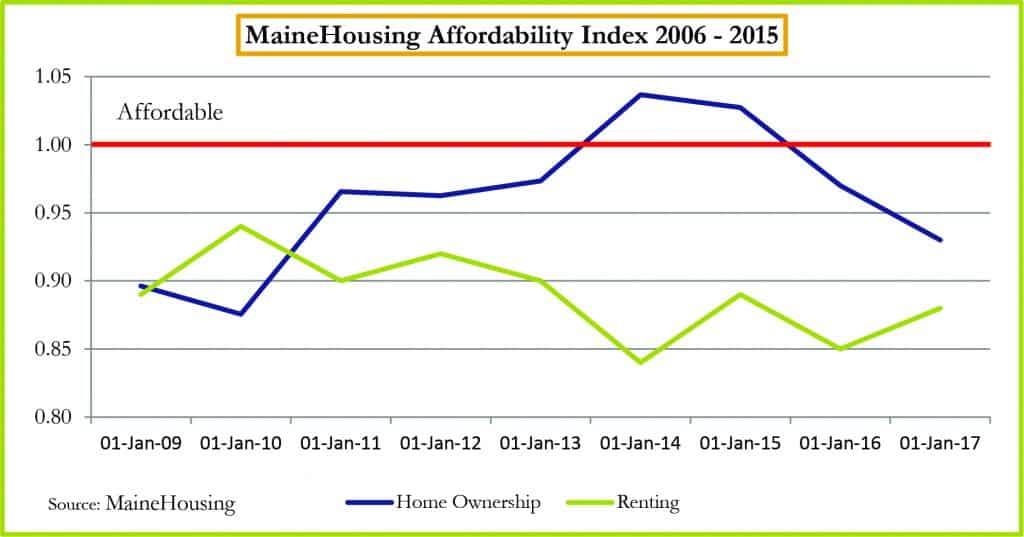 The rental vacancy rate has reached its lowest point in over a decade but there are fewer affordable units in stock. The supply of affordable rental units has shrunk by over 6,000 units since 2011.  This is approximately the same number of homes that have fallen from the owned category between 2011 and 2016 and may reflect the growth in single-family rental units. The increase in single-family rental units which are generally larger homes has likely contributed to increased rents and subsequently, continued market unaffordability. As with single-family owned units, multifamily construction activity has increased but has yet to return to pre-recession levels. 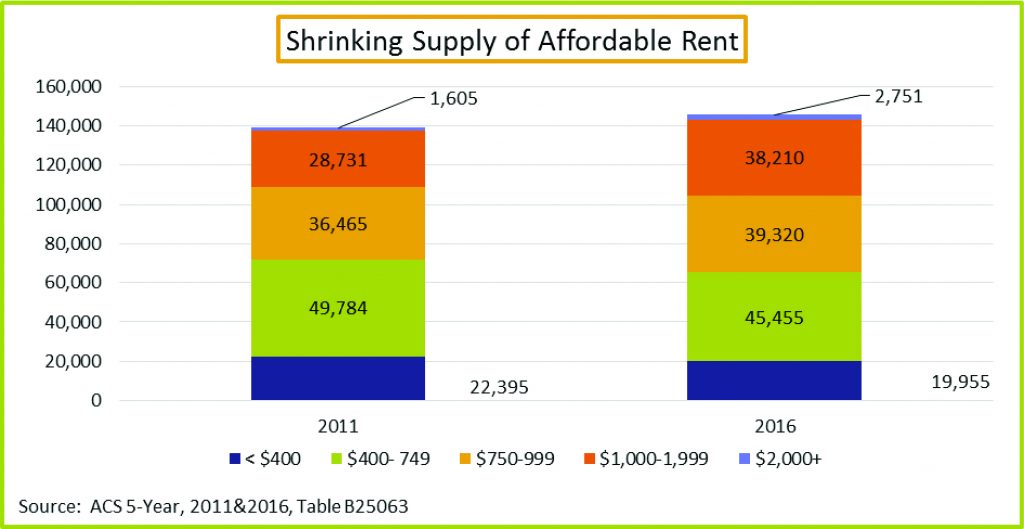 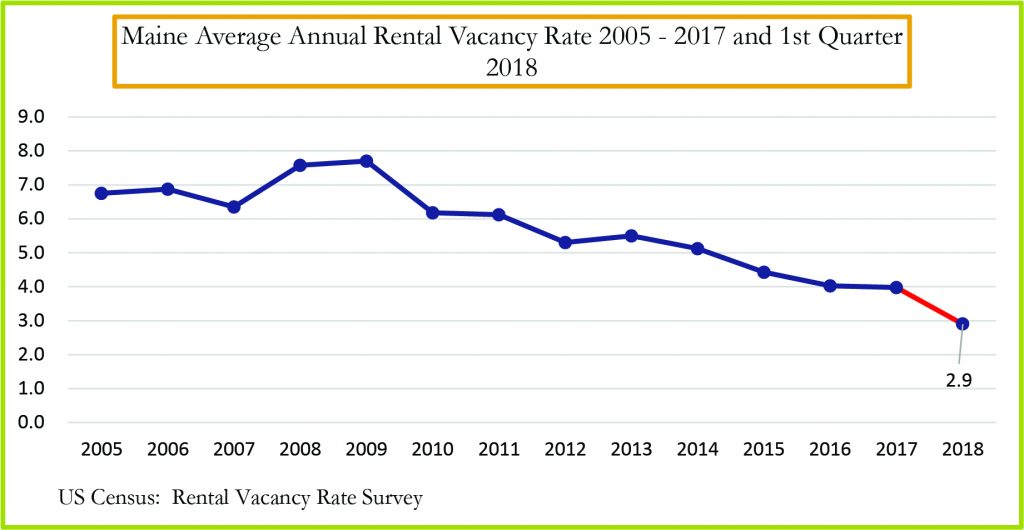 Current market conditions indicate that home prices will continue to rise as inventory remains tight.  Buying a home will remain out of reach for a growing number of Maine residents.  On the rental side of the equation, various forecasts have predicted a softening of rents, as the MaineHousing index suggests.   The forecasts of rental prices leveling off are largely based on greater participation in home ownership, particularly among prime age buyers.  If rental prices are beginning to decrease, the decrease is not occurring at the levels needed to bring rental prices down to an affordable level.