In a ballroom overflowing with the broad spectrum of Maine’s real estate and development professionals, MEREDA President Gary Vogel singled out five individuals at last week’s annual Forecast Conference. If tasked with building a structure, this quintet certainly would be qualified to do so: an architect, an interiors expert, a City planner, a lawyer and an artisan took the stage. Instead of an assignment, Vogel handed out MEREDA’s Annual Awards to this group responsible for significant and lasting contribution of responsible real estate development in Maine in 2019.

Brian Curley, President of CHA Architecture, received the 2019 Robert B. Patterson, Jr. Founders’ Award, recognizing his distinguished contributions and support of MEREDA as a highly effective volunteer, providing significant leadership and guidance. An active and enthusiastic member of MEREDA’s Board of Directors from 2011 to 2019, Curley served as vice president for four of those years; he also served on the Executive and Conference Committees.

MEREDA awarded this year’s President’s Award to Bruce Jones, recently retired from Creative Office Pavilion, and the MEREDA Board in December of 2019. MEREDA relies heavily on its volunteer board and committee members, and Vogel singled out Jones as an exceptionally dedicated volunteer who contributed with energy on every level. Since joining MEREDA in 2010, Bruce served on the Board of Directors for seven years, as the Vice President for four years, co-chaired the Conference Committee, and served on the Executive Committee.

Each year, MEREDA presents the Public Policy award to an individual whose efforts have had a considerable impact on public policy changes to benefit responsible real estate development in Maine. Jeff Levine, Adjunct Faculty at the Muskie School and MIT, Department of Urban Studies and Planning, took home the 2019 Public Policy award. From his willingness to present at numerous MEREDA events, to his passionate and diligent work on the behalf of the City of Portland, this award is certainly well-deserved.

The Volunteer of the Year Award is given by MEREDA’s current President to those who selflessly and tirelessly give their time, talents, and energy to MEREDA and its efforts. In recognition of their invaluable work on MEREDA’s 2019 Spring Conference, Shannon Richards of Hay Runner and Matt Worthen of Eaton Peabody shared this year’s Award. Shannon and Matt spearheaded the development of the 2019 Spring Conference, which fostered a thought-provoking discussion around the future of housing in Maine. The duo also served as the program’s moderators.

MEREDA congratulates these five outstanding members, and thanks every volunteer whose contributions of time and talent make the association’s continued success possible. 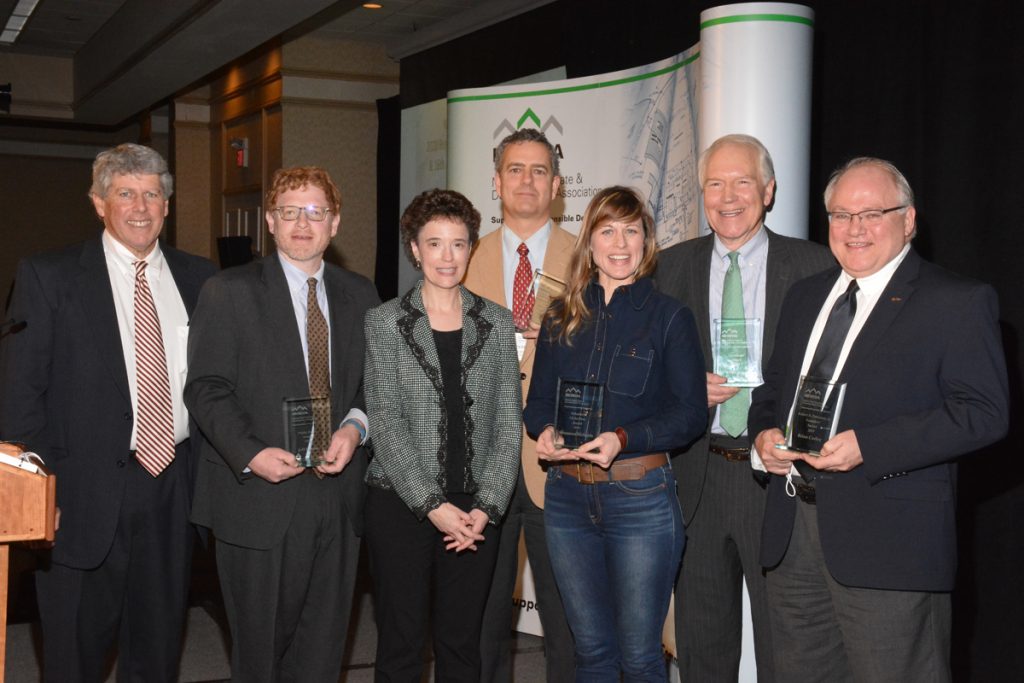 This entry was posted in Business, Events, People. Bookmark the permalink.