A record of over 750 of Maine’s real estate professionals gathered recently to hear experts give statewide economic projections for 2015 at the Maine Real Estate & Development Association (MEREDA)’s annual Forecast Conference, sponsored by TD Bank, in Portland.

In addition to a daylong event featuring economic overviews by region and by industry, the 2015 MEREDA Forecast Conference included an awards ceremony to recognize four outstanding industry professionals. With just one full-time staff person, the Maine Real Estate & Development Association depends heavily on the support of its members and volunteers. “The annual awards are a way for MEREDA to say thank you to some of the many people who have kept the organization so strong and vital,” said Michael O’Reilly, MEREDA President, as he announced the 2015 recipients. 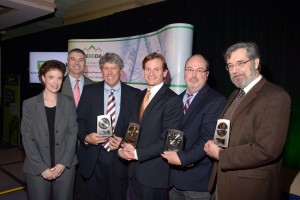 This year’s Robert B. Patterson, Jr. Founders’ Awardwent to James Whelan of Scarborough, Saco and Biddeford Savings Institution. This award acknowledges members of MEREDA who have distinguished themselves by making significant contributions to the real estate industry over many years. Jamie was instrumental in the organization beginning to take on legislative issues, which were seen as impediments to responsible real estate development. He was a dedicated past President having served a 3-year term, rather than the customary 2-year term.

The Volunteer of the Year Award recognizes an individual who has enthusiastically shares their time and energy working hard to support MEREDA and ensure the organization’s success. The 2015 Volunteer of the Year, Drew Sigfridson of Portland, CBRE | The Boulos Company, consistently goes above and beyond for MEREDA. During his time as MEREDA President, Drew spearheaded many initiatives, including a campaign to increase MEREDA’s media and public awareness, as well as orchestrating a new organizational plan, which allowed MEREDA to grow and become a greater voice in discussions about Maine’s economic development.

This year’s President’s Award was given to Gary Vogel of Yarmouth, Drummond Woodsum. This award acknowledges a member of MEREDA who has significantly stepped up to the plate on behalf of the organization over the past year. As chair of MEREDA’s legislative committee, Gary is a generous leader of the organization’s legislative agenda. His institutional knowledge and experience with MEREDA’s legislative history, combined with his knowledge of development challenges in Maine from his own law practice, provides MEREDA with a breadth and depth that benefits all MEREDA members.

The Public Policy Award is presented to a MEREDA member whose efforts have had a significant impact on public policy decisions for the benefit of responsible real estate development in Maine. The 2015 Public Policy Award recipient is Rick Stauffer of Portland, Preti Flaherty. Rick has been instrumental in MEREDA’s Legislative Affairs Committee over the past year. His active participation, offering his intellect and political strategy prowess, has not gone unrecognized. Rick also served on MEREDA’s Board of Directors for many years.

This entry was posted in Events, People. Bookmark the permalink.