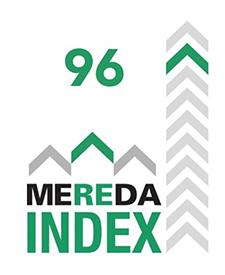 Earlier this month, with a best-ever 900 on hand for MEREDA’s premiere annual forecasting event, luminaries from Maine’s real estate industry unveiled the highest levels of The MEREDA Index in a decade — at a record-breaking 96. “This signifies the most robust real estate economy in Maine since before the recession,” said MEREDA board president Paul Peck.

Peck pointed out that these numbers are especially promising as “real estate has quickly become Maine’s second most important driver of GDP, second only to healthcare,” according to the U.S. Bureau of Economic Analysis.

This edition of The MEREDA Index was tabulated by Dr. Charles Colgan, economist, and was underwritten by Eaton Peabody, with support from Redstone, TRANE, and Bedford Cost Segregation.

The MEREDA Index is a measure of Maine’s real estate activity designed to track changes in Maine’s real estate markets.  It is a composite of nine seasonally adjusted measures reflecting both new development and transactions involving existing properties and it covers both the commercial and residential markets statewide. This most recent release covers the sector for the middle two quarters of 2017.

Watch a video about The MEREDA Index.

The following commentary on this edition of The MEREDA Index was provided by Dr. Charles Colgan:

That said, Maine’s commercial real estate segment, which comprises 50% of the Index, come in at 100.5, down 1.6% in this edition. The declines were led by a drop in commercial transactions and in square feet of commercial transactions. Commercial sales also declined by 0.4%, but there was a 2.2% rise in commercial rental rates on a square foot basis. “This component still stands above the pre-recession levels (on all measures except square footage), and reflects the overall state of the Maine economy, which has also reached pre-recession levels of employment but is growing at a very slow pace, indicating relatively weak demand for commercial space, according to Colgan.

The residential component of the Index came in at 92 (weighted at 40% of the overall Index). This sector lead The MEREDA Index, with a 5.8% increase.  According to Colgan, permits for new single and multi-family construction show strong growth of over 20% on a seasonally adjusted basis from March to September.  The metrics for mortgage originations (8.6%) and median price (6.1%) also showed strong growth.  Residential unit sales was also positive, up 3.2%.

The construction component came in at 91 (weighted at 10% of the overall Index), having grown consistently over the past six months, rising 6.7%, and is one of the strongest six-month period for this indicator since 2010.

For more information about The MEREDA Index, visit http://mereda.org/currentindex.php.

This entry was posted in Business, MEREDA Resources. Bookmark the permalink.