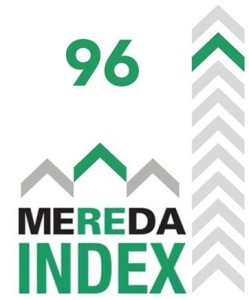 Maine’s real estate sector reached its highest point in 11 years, with the industry metric that measures the health of the market, The MEREDA Index, coming in at 96. The MEREDA Index grew by more than 7% over 2016, the strongest growth since the recession.

“The most recent quarter marks the eighth in a row — that’s two years — where The MEREDA Index has been above 90, a number not otherwise seen since the height of the market in 2006. That the real estate sector is so strong in Maine, and has been so strong for so long, is impressive,” said Paul Peck, board president of MEREDA, who is also a real estate attorney and real estate developer.

“Real estate is one of Maine’s biggest industries, second only to healthcare, contributing 14% of GDP. The strength of this sector benefits us all.”

The MEREDA Index is a twice-annual metric meant to measure the health of the sector against pre-recession, 2006 levels. It was designed and is compiled for MEREDA by Dr. Charles Colgan, an economist with the University of Southern Maine, and is comprised of three components.

Thanks to the support of Eaton Peabody and SMRT for underwriting this edition of The MEREDA Index, three industry insiders recently joined MEREDA to discuss the latest numbers.

The commercial market, accounting for 50% of The MEREDA Index, grew almost 9% over the course of six months, and was a key driver in the record-setting performance of the metric. “Commercial lease rates and square footage were both strong over this period, offsetting weaknesses in the volume of commercial transactions and sales price per square foot,” remarked Colgan, who also noted that total commercial transactions and median commercial sale price remained near and/or surpassed 2006 levels for this period.

The residential market, comprising 40%, “was unchanged over the past six months as sales of existing units and median price remained strong, but permits for new units dropped by nearly 17%. Estimated quarterly median price 1 hit 195,000 on a seasonally adjusted basis, equivalent to the 2006 first quarter figure … Sales of existing units and mortgage originations were both strong in the fourth quarter of 2016, but fell off in the first quarter of 2017,” according to Colgan.

And construction, measured solely by construction employment, has grown almost 9% in the past six months and almost 6% year-over-year. “This is the strongest growth in construction employment over the past several years,” said Colgan. Industry insiders say there is still strong demand for new construction projects to go online, and that more skilled workers are still needed in the industry, laying the groundwork for even more increases in this sector in the months to come.

“Stable interest rates and prudent lending by financial institutions has set a solid base for continued growth in the months ahead,” concluded Peck.

A full report of The MEREDA Index is available for download here.

This entry was posted in Business. Bookmark the permalink.