“These awards are a way for us to say thank you to some of the many people who have kept this organization so strong and vital.  Each of these recipients has made significant  contributions to responsible real estate development in the state of Maine, and MEREDA is proud to recognize them with these awards,” said Sigfridson.

The awards and 2013 recipients are as follows:

The Robert B. Patterson, Jr. Founders’ Award, which recognizes a member who has contributed to the industry or to MEREDA on a significant level over many years, was presented to Dana Totman of Brunswick.  Dana Totman’s career has focused on nonprofit and government management and leadership, specializing in leading organizations through significant change. He has served as President and CEO of Avesta Housing since 2000. Since joining Avesta Housing, Dana has increased the agency’s portfolio from 800 apartments to 1,900 apartments, including 278 new units completed or under construction in the past year valued at more than $61 million. He also led the creation of the Maine Affordable Housing Coalition and Avesta’s Home Ownership Center.   A longtime supporter of MEREDA,  Dana is a MEREDA Board Member and participates on its Legislative Affairs Committee.

MEREDA’s success is largely based on the support and commitment from its volunteer members, which is why each year MEREDA presents its Volunteer of the Year Award to an individual who willingly and enthusiastically volunteers significant time and energy on MEREDA’s behalf. This year’s award was presented to Jessica Estes of Yarmouth.

When MEREDA decided to create a semi-annual market Index, in collaboration with the Muskie School, that would show the statistical measure of changes in various metrics that affect the commercial real estate industry in Maine,  Jessica jumped right in and became our liaison. Because of her dedication and commitment, MEREDA will have a meaningful product that will act as an indicator for the strength of the real estate market in Maine.

Jessica is General Manager and Partner at CBRE | The Boulos Company where she oversees the day-to-day operations of the brokerage company. Since 2003, Jessica has held various roles in brokerage, marketing and management.  Jessica is an active participant on MEREDA’s Membership & Marketing Committee and the MEREDA Index Sub-Committee.

The Public Policy Award, is presented to an individual member whose efforts have had a significant impact on public policy decisions for the benefit of responsible real estate development in Maine.  This year’s award was presented to Rick Licht of Gray.

Rick has devoted many hours as a volunteer on MEREDA’s Legislative Affairs Committee, as well as on various taskforce groups dealing with Stormwater and Site Law legislation on MEREDA’s behalf.  Rick has become our “go to” guy on these issues and his knowledge and expertise are extremely valuable.

Rick is Principal of Licht Environmental Design, which he started in 2010. His firm focuses on project management, design and permitting of site development projects with a focus on implementing sustainability to all aspects of project development.  Prior to starting his company, Rick was a Senior Associate at Stantec in Portland for 3 years after the acquisition of his prior firm, Land Use Consultants, Inc. where he was a Principal and Director of Engineering for 18 years.

The Presidents’ Award, is a discretionary award given by MEREDA’s current president in recognition of someone who has significantly stepped up to the plate on MEREDA’s behalf.  This year, the award was presented to Paul Peck of North Yarmouth.

Paul brings a great energy and enthusiasm to MEREDA, and truly cares about Maine and  responsible development.  He has a real passion for in-fill, urban developments and streetcars.  Paul is a very active voice on the MEREDA Board and is Chair of MEREDA’s Conference Committee.

Paul began his legal career in 1986 in his home state of Connecticut. Paul moved to Maine in 1988 and joined Drummond & Drummond in February of 1992. Paul is currently licensed in Maine and Connecticut and works on creditor rights including workouts, foreclosures, and commercial collections; business law and real estate law, including acquisitions, sales, litigation, and development. Paul is also a real estate developer having developed two significant ski area condominium projects and two vacation ownership resorts.  He is currently working on a significant multi-family development in Portland’s West End. 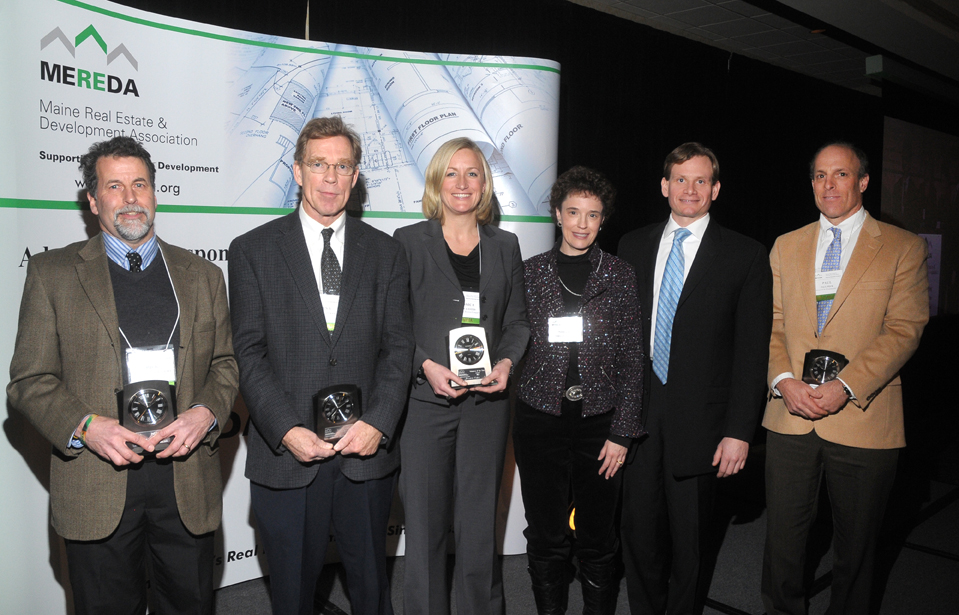 Founded in 1985, MEREDA is an organization of commercial real estate owners, developers and related service providers, whose mission is to promote an environment for responsible development and ownership of real estate throughout the State of Maine. More than 600 people attend MEREDA’s Annual Real Estate Forecast Conference and Member Showcase held each January.

This entry was posted in Events, Media, People, Uncategorized. Bookmark the permalink.