PORTLAND, Maine (5/20/14) – In a first-ever forum for the state, on May 20 the Maine Real Estate & Development Association (MEREDA) hosted “50th to 1st: Ingredients of a Successful Economic Development Plan,” a discussion on Maine’s ranking as the worst state in which to do business according to Forbes. Alan Hall, a businessperson and entrepreneur from Utah, a state opposite Maine at the top of Forbes’ rankings, served as keynote and shared what he considers the key pillars of economic development, in hopes of inspiring those in attendance. “Government officials and business leaders need to resolve that they want to move the state forward,” remarked Hall. 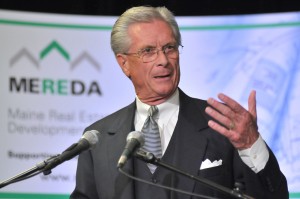 Drew Sigfridson, president of MEREDA and managing director at CBRE | The Boulos Co. said that, as contradictory as it sounds, he was pleased to welcome such a large crowd to a forum on such a tough topic. “Maine needs an economic development plan if it is going to compete for business nationally and make progress from its last place ranking on Forbes‘ list of best places to do business,” he said. 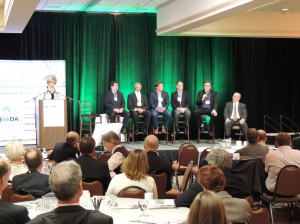 Andrea Cianchette Maker, public policy counsel to MEREDA, facilitated a conversation with six local panelists and attendees on how Maine might be able to catapult to the top of the list. Maker noted that MEREDA would like to be involved in the larger discussion around economic development in Maine, and will work on a model of bringing feedback to Maine’s top elected and appointed officials. Thanks to the robust conversation from the day, it’s likely that MEREDA will have a lot to contribute.

For instance, panelist Petur J. Petersen, station manager of Eimskip Portland, was one of the panelists, and noted that the city of Portland and other public entities were helpful to his firm in establishing their presence in Portland. He suggested that Maine open up more services to utilize the coast and ports improve infrastructure to move goods and services out of the state.

The panel discussion was robust. Peter DelGreco of Maine & Company urged that we need to “take care of our businesses here” and that “we cannot derail what is already working well.”

To that end, John Everets of The Bank of Maine worried aloud, “is Maine at risk of losing companies?”

John Fitzsimmons of the Maine Community College System responded by noting that the “business community needs to support and work more proactively with education.” We need to lay out a “plan for education, economic development” and “we must commit for the long term,” he said.

Kent Peterson of Fluid Imaging Technologies nodded along. We need a plan, he incited, “this needs to go beyond quality of life.”

Josh Benthien of Northland Enterprises noted that affordable energy needs to be part of the mix, and that Maine needs to “pay attention to our clusters to attract anchor businesses.”

Each attendee was invited to ask questions of the panel. The conversation was robust, wide-ranging and passionate. For instance, State Representatives Amy Volk (R-Scarborough) and Anne-Marie Mastraccio (D-Sanford) both emerged from the audience with thoughtful questions, though seemed to disagree with one another as to whether Maine was already undertaking strides in the right direction. Other business and civic leaders from almost all of Maine’s counties engaged with questions as well.

“This is a dialogue that really needed to happen,” remarked one attendee on her way out.

The 300+ business leaders in attendance were then asked to “vote” on what they thought Maine was doing wrong, and right, to improve its economy. The activity was popular, with almost all offering up their ideas. The results of that feedback will be reviewed by Maker and others in the coming weeks as MEREDA shapes its next step vis-à-vis this new economic development direction for the organization.

As an optimistic footnote to the conversation, Sigfridson announced that Maine’s real estate economy has grown 2.4% over the last year, with The MEREDA Index coming in at a healthy 78. The improvement shows steady growth in new construction employment and residential real estate sales. Sigfridson noted that The MEREDA Index indicated the following trends since January, when the last number was released:

“Maine’s economy continues to move in the right direction. Historically, the real estate sector has been a leading indicator in terms of overall economic recovery, which isn’t to say there is not work to be done – but folks should be optimistic about the health of Maine’s real estate industry, especially in terms of added construction jobs, which are likely to spur even more growth within the commercial market,” said Sigfridson.

The MEREDA Index is comprised of three factors: commercial real estate, residential real estate, and construction employment – weighted at 50%, 40%, and 10% respectively. Major gains in The MEREDA Index for this quarter were driven by the residential real estate component, which has grown a remarkable 7% over the last year, counteracting the commercial market, which has continued to struggle to achieve significant acceleration. Construction employment has begun to recover but still slowly, up 0.5% over the past year. 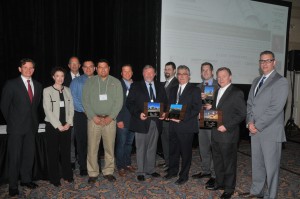 All told, the morning was a great gathering of some of the state’s top minds and movers and shakers. The proof in the pudding will be the continued dialogue around the economic development issues in the state. MEREDA and its many influential members incited the conversation, and are well-positioned to influence it in the future.

About the Maine Real Estate & Development Association (MEREDA)
MEREDA is a nonprofit whose members banded together in 1985 to present the views of the state’s real estate industry to lawmakers in Augusta. Today, MEREDA’s more than 280 member firms are primarily from the commercial real estate industry and employ thousands of Maine citizens and drive a huge percentage of Maine’s economic activity. The organization aims to promote fair, responsible development and ownership of real estate throughout Maine. For more about MEREDA, visit www.mereda.org.

About The MEREDA Index
The MEREDA Index is a metric that measures the pulse of the state’s commercial real estate industry, including sale and lease activity, construction starts and other data – for the first time ever, aggregated into one figure as an indicator of this important sector of Maine’s economy. The MEREDA Index is a composite of nine measures reflecting both new development and transactions involving existing properties and covers both the commercial and residential markets statewide.  The MEREDA Index is quarterly beginning in the first quarter of 2006 and is published twice annually in partnership with renowned Maine economist Dr. Charles Colgan, associate director of the Maine Center for Business & Economic Research, and his team at USM’s Muskie Institute.  The most recent report covers the Index through the first quarter of 2014.

This entry was posted in Events, People. Bookmark the permalink.