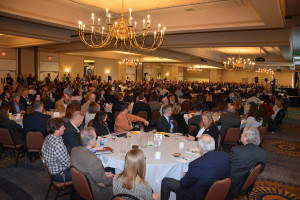 A sell-out crowd of more than 900 were on hand as MEREDA hosted its annual Forecast Conference last week in Portland. This is the largest gathering of commercial real estate professionals in Maine, and is specifically geared toward developers, brokers, architects, bankers, attorneys, accountants and other industry professionals.

Each year MEREDA assembles some of Maine’s top real estate leaders to provide an economic overview and outlook on the profession’s key economic indicators, along with the popular market overview by property type, focusing on both commercial and residential real estate forecasts.

In each of these three segments, presenters indicated that their sector could continue to grow if there were more quality inventory available, especially in the Portland market, which is particularly desirable.

Some of the activity has migrated to suburbs such as Westbrook, Saco, and Biddeford they said.

Davin said the future is in the “surban market,” outside of the city with walkable amenities. Lamontagne reported that the industrial vacancy rate has fallen to 1.25% in the last seven years in all of Cumberland County, and though lease prices have risen, they aren’t yet high enough to fuel new construction, he said, noting that “affordability still matters.”

“Real estate is Maine’s second most important driver of GDP, second only to healthcare,” reminded MEREDA president Paul Peck. “The market is at an all-time high, but this trajectory could still continue for at least a few more years. Experts have been tapped to present today, and to help us identify areas where there is continued work to do, to keep our industry and Maine’s economy healthy.”

On the Midcoast, Brunswick Landing continues to interest folks, according to Steve Levesque of the Midcoast Regional Redevelopment Authority, with space downtown and at Brunswick Landing particularly hot. Kennebec and Androscoggin Counties are seeing demand too, especially in the industrial space, and with a handful of scattered developments making a large impact, according to Kevin Fletcher of KW Commercial.

In Bangor, Bev Uhlenhake, Epstein Commercial Real Estate, reported that vacancies and closures at the Bangor Mall continue to skew numbers, though demand both downtown and on the water is still very considerable.

That said, Nate Stevens of CBRE | The Boulos Company, reported almost stagnant demand for existing office space in southern Maine, with those interested, like WEX, developing space specific to their needs.

“Hip, urban space, close to population centers, is still key,” summarized Peck. “Though we will start to see development further up the midcoast and into suburbs, such as Falmouth, areas surrounding Camden, Brewer, …”

Each of the presentations from MEREDA’s forecast conference are available for download here.

“Our spring conference is slated for May 16, and we will tackle the high cost of construction, from workforce development programs to project planning, and to adopting new technologies, such as modular, LEAN, and others, which can cut down on timelines and moderate expenses,” said Peck. “This issue has been around for a while, and we’re thrilled to present a toolbox for developers and others. Hopefully the solutions to this problem can help us tackle the inventory issue.” Registration for MEREDA’s spring conference will be available soon at MEREDA.org.

This entry was posted in Business, Events, Networking, People. Bookmark the permalink.