In the third of a 6-part series exclusive to the Maine Real Estate Insider, we’ll provide an up-close look at the most notable commercial development projects of the past year that are helping to fuel Maine’s economy in terms of investment and job creation.  MEREDA is proud to recognize responsible development based upon criteria including environmental sustainability, economic impact, energy efficiency, social impact and job creation.  Please join with us in celebrating the Capital Judicial Complex in Augusta.  A conversation with Alan G. Kuniholm, AIA, LEED AP, principal of PDT Architects. 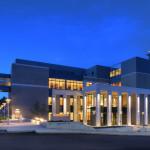 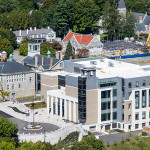 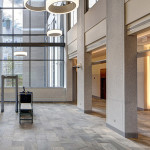 Alan Kuniholm:  Funding for the Capital Judicial Complex was appropriated during the Baldacci Administration in 2010 and is the second major judicial consolidation project in the State, the Penobscot Judicial Center in Bangor being the first. The CJC consolidates the Kennebec County Superior Court, the Augusta District Court, the Family Court, Administrative Office of the Courts including the judicial marshals, and the Office of Information Technology. The new complex was designed as a 100 year building and comprises 125,000SF on four floors above structured parking on a 2.4 acre urban site adjacent to the historic Kennebec County Courthouse which has been in continuous use since 1830. The CJC provides for 6 new courtrooms, jury and non-jury, conferencing, mediation and multi-purpose spaces, judicial chambers, and safe and secure separated circulation for the public, the judiciary, and prisoners alike.

Alan Kuniholm:  The over-arching goals of the new complexes is to better serve the public through consolidation of separate facilities, new state-of-the-art security and technology, and to replace aging facilities with modern, energy efficient buildings. The new CJC project was designed for LEED Silver.

Alan Kuniholm:  Of course planning and funding for this project started years before PDT Architects was interviewed for the project in November of 2010. We were awarded the contract in January of 2011.  Consigli Construction was selected as the construction manager in the fall of 2011 just as the programming and space allocation was being completed. PDT completed schematic design in March of 2012. In August of 2012 construction began with an early demo package for the existing buildings on the site, and another package for site utilities. A GMP was reached in July of 2012 for $43M when the design team was 30% complete with design development, an early structural package allowed site-work, piles, and grade beams to begin in November of 2012. We completed the design documents in April of 2013. Steel erection was complete and the new court facility was weather tight in November of 2013. The project was bid over 24 months with multiple bid packages, the AV package was the last package to be bid just before the courthouse opened to the public on March 1 of 2015.

Alan Kuniholm:  (1) Fast-tracking a courthouse project on an urban brownfield site with over 100’ of elevation change, (2) Closing a street and connecting the new court facility to the 1830 Kennebec County Courthouse with a glass enclosed bridge, (3) Being cross-examined during the design process……

Alan Kuniholm:  The first sitting of a court in this area was when Augusta was part of Hallowell, and Lincoln County, and still part of Massachusetts, and took place in Pollard’s Tavern in 1787 which later burned down. Winthrop Street was the main artery of Augusta rising up the hill from Water Street. A new courthouse was built to replace the tavern for the Court of Common Pleas, and at that time they had no funds to complete the project and held court in an unfinished building.

Alan Kuniholm:  The lantern over the public stair, it is symbolic of the scales of justice, and when using the stair or seen from afar, takes its place amongst the church spires and the capitol dome.

This entry was posted in Business, Networking. Bookmark the permalink.