The Right Equation for Responsible Development: Spotlight on Seaport Village & The Inn at Seaport 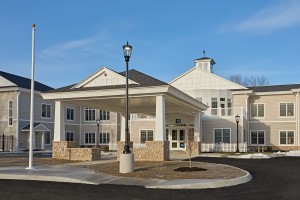 In the third of a 7-part series exclusive to the Maine Real Estate Insider, we’ll provide an up-close look at the most notable commercial development projects of the past year that are helping to fuel Maine’s economy in terms of investment and job creation.  MEREDA is proud to recognize responsible development based upon criteria including environmental sustainability, economic impact, energy efficiency, social impact and job creation.  Please join with us in celebrating Seaport Village and the Inn at Seaport.  A conversation with developer, First Atlantic HealthCare.

First Atlantic HealthCare:  Construction of the $15.1 million Seaport Village Healthcare campus began in earnest in September of 2013 and through the great work of Foreside Architects and Ledgewood Construction we opened for service 14 months later in early December 2014. The 56,000 square foot project replaced an older smaller facility and is the newest facility to be built and operated by First Atlantic HealthCare. Seaport Village offers private accommodations for Skilled-Nursing Care, Skilled Rehabilitation and Assisted Living.  Noted for its distinctive architecture, high safety standards and person centered care Seaport Village joins seventeen other healthcare properties owned or managed by the firm throughout Maine. The build time of fourteen months was impressive when considering that most of the construction occurred during one of the coldest, snowiest winters in Downeast Maine history.

First Atlantic HealthCare:  There are three elements that together made our project possible. Collier’s nursing facility, predecessor to Seaport Village, was an older 40-bed facility in need of replacement. At the same time, Maine is experiencing a rapidly aging population, especially within 85+ cohorts, an age profile most likely to use skilled nursing or assisted living services. Explicit to our project, Ellsworth Maine, located in Hancock County is the fastest growing community in the state according to the 2010 census with a rapidly aging population. Adding to the city’s aging demographic; the City of Ellsworth was very actively planning to support services for its older citizens, specifically bringing assisted living to the city. City leaders took an early and active interest in our proposal which resulted in very timely, cost efficient Planning Board approval. These three elements: (1) our goal to replace an outdated facility with a larger modern campus, and (2) our goal to meet a growing aging population’s needs, and (3) strong city support and involvement from the beginning, all were motivation to complete this project.

MEREDA:  That sounds like quite a process. How long were you in the planning stages before construction started?

First Atlantic HealthCare:  Building new healthcare facilities in our state is a very complex, time consuming process. Approval rests on obtaining a Certificate of Need from the state of Maine, followed by securing all necessary permits and local approvals, biding and awarding the project, obtaining financing, managing construction and finally safely transferring residents from the old property to their new setting. We were three years in planning and permitting prior to construction, which took fourteen months. In all, this project was five years in development.

First Atlantic HealthCare:  We were fortunate to have such strong city support for our vison of a modern senior services campus located near the downtown. However, finding an appropriate site was our greatest challenge. In the end, our location next to the Ellsworth Senior Center was perfect. Oh, and then there was the deepest frost in years and hammering snow storms, or did we mention that already?

First Atlantic HealthCare:  As is the case with project development, many, many months are involved with preplanning:  financial projections, soft site location, market analysis to name just a few predevelopment activities that remain internal and closely held with the developer. Once we green lighted the project and began to execute our development plan, we were over joyed and overwhelmed by the backing of the project from the Ellsworth community. In particular the local paper, The Ellsworth American, took an early interest and told the story of our project’s progress to its readers throughout construction and then ran a full center fold feature titled “Welcome Seaport” that really introduced us to the community. So despite the many challenges that arose as the project went forward from inception to completion, City leaders, its media and community members remained solidly in favor of our efforts to bring a new state-of-the-art healthcare center to their community that expanded jobs, enhanced city financial resources and agreed with its vison to serve seniors. I can’t say the project’s endorsement was unexpected but the touching degree of genuine appreciativeness shown our company was greatly unanticipated yet very meaningful to our development team.

First Atlantic HealthCare:  Our Inn architecture fits our site well and suggests the maritime heritage of the Downeast region.  Designing a modern healthcare facility for 91 community members and our employees resulted in a large footprint and to have done so with a stately residential feel in keeping with neighboring property, and within resources available, is one significant achievement. Most notable, though is the life quality for our guests that the well thought out elements of our interior design promote. Whether it is through private rooms with private baths, appealing quiet “neighborhoods” for fifteen residents, our personalized dining or use of our putting green guests are surrounded by enlightened design innovation that enhances well-being and an active involved lifestyle appropriate for their abilities. At Seaport we feel we have set the bar for supporting the components of wellness and good health for an aging population: a professional and caring staff, good food locally sourced, fun and engaging activities and best in class design that promotes life quality.

This entry was posted in Business, Member Articles, People. Bookmark the permalink.