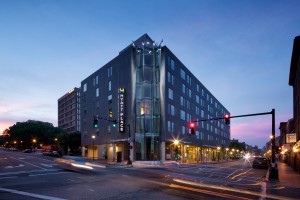 In the fifth of a 7-part series exclusive to the Maine Real Estate Insider, we’ll provide an up-close look at the most notable commercial development projects of the past year that are helping to fuel Maine’s economy in terms of investment and job creation.  MEREDA is proud to recognize responsible development based upon criteria including environmental sustainability, economic impact, energy efficiency, social impact and job creation.  Please join with us in celebrating The Hyatt Place Portland, Old Port.  A conversation with developer, East Brown Cow.

MEREDA: Describe the building and project.

East Brown Cow:  The Hyatt Place Portland Old Port , located at 433 Fore Street in the heart of the Old Port, stands seven stories high, is comprised of 130 rooms, and features an indoor pool, meeting room, exercise gym, café, restaurant and cocktail lounge.  A carved out corner retail space, located at 443 Fore Street, is the home of Evo, a Mediterranean restaurant and lounge that opened in the summer of 2015.

East Brown Cow:  The impetus of the project was to take advantage of a baron surface parking lot that had been traditionally a dark underutilized piece of land, and make it a vibrant streetscape that complimented the surrounding buildings with activity 24 hours a day versus the 9-5 business hours of the other office/retail buildings around it.

East Brown Cow:  Conceptual planning began in the summer of 2012. City site approvals occurred in November 2012.  Groundbreaking occurred in February of 2013.  However, design and finalization of documents/plans continued right into fall of 2013.  So, two very full years!

East Brown Cow:  The biggest challenge was the difficulty with the City process trying to get approved a more modern sophisticated architectural building because it was something very different from the traditional historic design of the downtown area.  Zoning requirements, even with no zoning changes requested, and historic review requirements drastically impacted the design of the building and ultimately costs.  Although infill projects are traditionally trumpeted by any City, Portland included, they do come with restrictions of tight sites to work in, difficult logistics, and the need to have flexibility of the municipality to waive certain conditions to keep such a project feasible.

East Brown Cow:  Contending with a franchise was very different than expected.  The expectation was that a franchise would want to maintain highest quality, but we learned that there was resistance to any change from protocol, even if the requested change was for higher quality or more efficiency than prototypical design standards.  But East Brown Cow ultimately prevailed on pushing some changes regarding local flair (art) and efficiencies in mechanical systems which complement the brand stated focus on modern efficiencies.

East Brown Cow:  The building does an excellent job of integrating the hotel guests/activity into the street fabric and vice-versa – the energy of the occupants and the streetscape are transparent in both directions. Clearly, the large curtain wall on the first floor all the way to the corner “Crinkle Wall”.