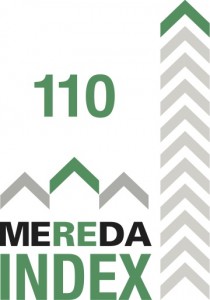 The MEREDA Index is the leading way our industry tracks changes in Maine’s real estate markets. It’s a composite of nine measures reflecting activity in both new development and existing properties, in commercial and residential markets, as well as construction employment.

Please note that this report marks a change in methodology to smooth out some of the sharp spikes in certain Index components. As part of this adjustment, some prior quarters have been reconfigured.

Driven by significant improvements in the commercial sector, particularly in large property sales, the composite index is up to 110—the highest level ever. This is 25% above early 2014.  Most of the dramatic growth occurred in early-2015, and the trend below is reflective of that growth being annualized:

As discussed below, this growth is largely the result of dramatic gains in the commercial sector. The residential and construction components of the index are still below the early 2006 base level.

Residential real estate has been showing strength in sales of existing houses and mortgage originations over the past year. New housing construction (as measured by permits) was very weak in first quarter 2015, reversing an upward trend through 2014. However, this may have been influenced by the harsh winter. The median home price is up only slightly (2%) over year-ago on a seasonally adjusted basis. The total Residential Index stands at a 77, just 5% above the 73 of a year ago. The second quarter Index may reveal more.

All components of the commercial index contributed to a record Index level of 143, compared to a 102 a year ago. The volume of commercial transactions was up 24%, and price per square foot was up 18%.  Lease rates per square foot have grown more slowly, at 5% over the past year.

The largest growth of any index component, however, has been in commercial square footage sold.   A number of large commercial property sales from late 2013 through early 2015 have pushed this component to five times the level of first quarter 2006. The sale of four large office buildings properties in particular—One and Two Portland Square, and 100 Middle Street—played an immense role in this component.

A full copy of the Spring 2015 MEREDA Index can be found at mereda.org/currentindex.php.

All data is either quarterly or monthly, converted to quarterly and then either seasonally adjusted or trended using moving averages and then compared to the value of each variable in the first quarter of 2006 (2006Q1 = 100).

Data sources for the index include: the Maine Association of Realtors, the Boulos Company, Bureau of Labor Statistics, Mortgage Bankers Association, U.S. Census, and Moody’s Analytics.

This entry was posted in MEREDA Resources. Bookmark the permalink.