MaineHousing has released the 2015 Maine Home Ownership and Rental Affordability Index. This latest index reveals little change in affordability from 2014 to 2015 for both home buyers and renters in Maine. Home buying remains affordable while renting is still unaffordable though showing signs of improvement.

The index, used by Maine housing market analysts, provides a statewide and county snapshot of home buying and rental affordability. The home buying measurement is based on the ratio of home price affordable at median income to median home price. A ratio at or above 1 indicates homes are affordable while an index of .99 or below indicates they are not affordable.

For the second year in a row the index indicated that home buying in Maine remained affordable, although the index dropped from 1.04 in 2014 to 1.03 in 2015 due to a 4% increase in median home prices over 2014. The improved home affordability we’ve seen over the past two years is due in part to the post- recession declines in median home prices, interest rates, and consumer confidence. Median home prices plunged 14% from a high of $185,900 in 2007 to a low of $158,000 in 2009. From 2010 to 2014 prices improved only a mere 3%. As home prices fell so too did interest rates from a high of nearly 7% in July of 2006 to a low of 3% in December of 2012. Declining interest rates and home prices should have stimulated the real estate market but consumer wariness dampened buying. Higher inventories of foreclosed low priced housing, an unwillingness of owners now owing more than the value of their home to sell, and the tendency of buyers to wait for the market to hit bottom all contributed to the slow housing market recovery.

Improving median incomes should also have helped improve the housing market but the increases in income, like the recovery itself, was too little and too slow. Between 2005 and 2009 median household income actually increased 9% but slowed to just 2% from 2010 to 2014. The slow growth in income and an even slower growth in median home prices have combined to make buying a home affordable.

Another variable to consider is the home vacancy and home ownership rates. A continued ten year downward trend in vacancy and ownership rates could further dampen the chances of more robust increases in the median home sales price. The relationship between inventories and house prices is generally positive with inventories rising with increased home prices. This relationship seems contradictory. With all else the same, rising house prices will draw homeowners into the market increasing inventory while lower prices provide less incentive to sell.

Another interesting development is the increasing preference to rent as opposed to buying despite the favorable conditions for buying.Decennial Census data from 2000 to 2010 revealed the preference for renting. More recently the 5-year Census numbers corroborated this shift to renting.

An outlier with potential impact on home buying affordability is the millennial generation. This generation has not entered the home buying market at similar rates as preceding generations. Their reluctance to enter the market has been discussed in numerous studies that focused primarily on the economic and financial challenges they have faced or witnessed since the recession ranging from student loan debt to lack of savings needed to make a down payment. Recent data suggests their preference for renting in Maine remains stronger than buying. Between 2009 and 2014 millennial homeowners, 25  34 declined 13% while renters of this age increased 4%. In addition, this segment of the population is projected to peak in 2017 and then decline as a percentage of the total population. Still, at an estimated 229,000 strong, they can impact housing and evidence suggests they will in the coming year.

Finally, it should be pointed out that while buying a home has become more affordable, owning one is often not. In 2014 33% of owners with a mortgage were paying more than 30% of their income on housing related costs — an improvement from 35% in 2009. The percentage of owners without a mortgage paying over 30% of income on housing dropped from 18% to 17% over the same span of time. Despite the improved numbers, these homeowners are considered cost burdened.

In 2015 renting an apartment remained unaffordable. Historically buying a home had been financially more difficult than renting. That changed in 2011, just two years into the recovery. Unlike home buying, the renting index actually improved from .84 in 2014 to .89 in 2015 due to a slight drop in the average 2-bedroom rent statewide. The reasons renting remains unaffordable in Maine are rooted, like home buying affordability, in the recession.

Demand for rentals increased when we saw a rise in foreclosures during and immediately after the recession. Reluctance about buying a home combined with the impact of higher unemployment and slow income growth coming out of the recession all worked to slow homeownership and make renting appear to be a better option. Additionally rental units, though older than owned, generally have fewer bedrooms and less space making them a more attractive option from a heating cost perspective. Add to this tougher credit restrictions and the need to save for down payment and closing costs for buying and you have increased demand for renting. The problem has become particularly acute in the Portland and Rockland regions, reflecting Maine’s population shift toward the southern and coastal areas.

Average 2-bedroom rents decreased 3% from 2005 to 2009 far less than the 14% decrease we saw in home prices. Unlike home prices however, average rental prices then increased 7% from 2010 to 2014. As this was happening median renter incomes rose from 7% 2005 to 2009 but then decreased 5% by 2014. The chart below illustrates how increasing average 2-bedroom rents outpaced renter income. The exact opposite happened to home buyers.

Renting will remain unaffordable in Maine through 2017 and possibly into 2018 as a result of a limited supply. Despite a recent increase in permit activity for multifamily residential units, the supply of single family (owned) homes has grown significantly faster than rental units over the past three decades. Nationally, multifamily construction has led the way during the recovery but not as much in Maine. In fact, multifamily construction in Maine has lagged behind single family construction for three decades. Nearly 84% of residential permits in Maine were issued for single family units in contrast to 16% multifamily since the 1980’s. Absent more rental construction, the rental vacancy rate will continue to decline and if demand continues to increase so will rents. In addition, as more owners now find themselves able to gain from selling their home instead of renting it, rental stock will drop putting additional upward pressure on rents. 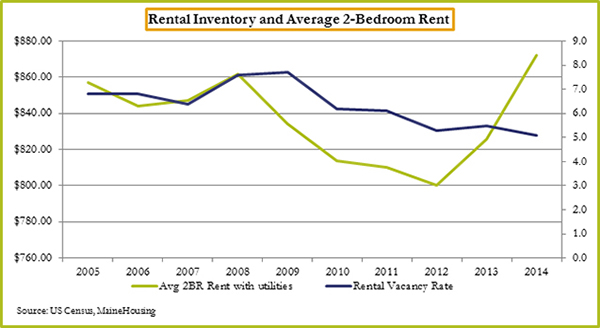 Another important variable that will keep demand on rental units high is renters’ income. Of 158,000 renter households only an estimated 25% (37,280) earn enough to buy a home at the median home price. And, 52% of renter households in Maine pay more than 30% of their income for housing and 80% of those pay over 35%. Additional supply of rental units is needed to meet both general market demand and a growing population of Maine renters needing rental assistance.

Buying a home should remain affordable through 2016 and possibly into 2017. While continued growth in jobs and income, home prices and interest rates should improve overall market conditions, it will likely happen at a slow pace. For buyers, the continued down payment and closing cost assistance program now incorporated as part of MaineHousing’s First Time Home Buyer Loan Program will add additional home buyers and in particular millennials. In 2015 nearly 60% of program participants were millennials — a homebuying rate that exceeds the market at large and suggests that millennials do indeed want to buy. Looking to the future, as the market improves for buyers, affordability will decrease. Buying a home is affordable, for now.

More quality supply is needed to alleviate housing affordability for renters in Maine. Declining vacancy rates and increasing rents are limiting the market for renters particularly in the coastal counties and urban areas. MaineHousing can seek to bring more renters into the home buying realm with targeted down payment and closing assistance. However, with slow income growth, many of these buyers will likely be cost burdened. Improved utilization of available energy assistance programs might reduce cost burden but the gains, given incomes, might only be marginal for renters. Renting in Maine still has a way to go before it becomes affordable. As long as it remains unaffordable, rental assistance programs such as Housing Choice Vouchers and the construction of subsidized housing will remain a necessity.

This entry was posted in Business, Networking. Bookmark the permalink.