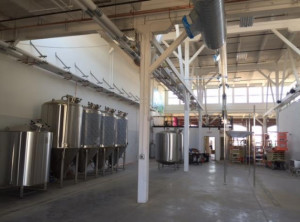 The explosion of craft brewing in the recent years has created a need for support of breweries from other industries, including construction and real estate. In a study conducted by the Brewers Association, the number of operating breweries in Maine increased by 13% in 2015, and the Maine Brewers’ Guild projects a total of 80 operating breweries in the state by the end of 2016. These small, independent and traditional brewers have plenty of room for continued growth as the industry shows no signs of slowing. Not only is the craft brewing industry booming, but the industries that provide supporting products and services are as well.

It is important for brewers to consider what they ultimately want and need in a space from the start in order to foster sustainable growth. Contractors can play a crucial role through the entire decision making process, from assisting in pre-planning and evaluating raw space to building or renovating to planning for future expansion.

All breweries have basic needs

Finding the right space to accommodate a brewery’s basic needs can take a long time, even up to a year in some cases. Often a brewery will consider the surrounding area and community more than at the actual space itself. Many even take unique spaces and convert them for their business. From the repurposed wharf in Belfast that Marshall Wharf Brewing Company calls home to the historic rail facility currently being renovated for Bissell Brothers Brewing Company at Thompson’s Point in Portland to former landscaping and salt shed that now houses Fore River Brewing Company in South Portland, brewers are getting creative in their renovations. However, unique facilities create challenges for the construction team to identify and address. It is imperative for contractors to work closely with brewers to problem solve issues early on in order to create a smooth start-up process.

Power, water quality, ceiling heights, venting, structural capacity and durability of flooring, and drainage are all major concerns when building out or renovating a brewery. For instance, brewing equipment can be rather large depending on the batch size the brewery produces. Standard size equipment can range anywhere from 300 to 1,200 square feet depending on the selected barrel system, and have heights in excess of 30 feet. Weighing these factors and how they impact a facility’s ceiling heights, floor space and access all require careful consideration in the planning process. Growth and expansion are best considered at the outset rather than as an afterthought. Including these plans into initial construction design is critical.

At the recent New England Craft Brew Summit, hosted by the Maine Brewers’ Guild, Peter Bissell, of the Bissell Brothers Brewing Company noted, “You need to look at the forest from the trees and always think of what’s next.”

When consulting with brewers, it is important to help them think about the space in terms of expansion over the next three to five years.

Tasting rooms have become increasingly popular at breweries, as they provide an opportunity to share product with patrons, test out new brews and help increase revenue. Constructing a tasting room within a brewery brings up a number of additional considerations. These can include additional fire/life safety and separation, along with adequate egress routes in case of an emergency. Additional onsite parking is usually required due to increased traffic at the brewery. Finally, local authorities should be consulted, so that beer/liquor and food licensing requirements are clearly understood before a tasting room construction commences.

Partnering for the future

Young breweries do not always have a lot of capital for construction initially. However, it’s worth keeping in mind that the need for expansion often comes quickly and needs to be accounted for in initial construction. This need for expansion underscores the importance of developing a trusting relationship between the contractor and brewery, as both parties are integral to achieving mutual success.