Maine is experiencing a fundamental mismatch between its housing stock and its housing needs, and that mismatch is creating enormous problems for our families and our state’s economic well-being. For tens of thousands of Mainers, the price, quality, size and location of the homes available to them are simply out of synch with their needs and resources. This housing market failure affects wide swaths of Mainers, but seniors on fixed incomes, people with disabilities, and lower-wage workers are particularly affected. Housing practitioners and advocates are responding to this dilemma with a new proposal to double the current rate of production of affordable homes in Maine, through the creation of a new state affordable housing tax credit.

Providers of affordable homes report staggering demand statewide, and an increasing inability to keep up: the aggregate waiting list for affordable housing managed by members of the Maine Real Estate Managers Association, the state’s largest apartment association, has risen to more than 32,000 households; the Maine Association of Public Housing Directors reports that over 17,500 Maine households are now on their waiting lists for federal rental assistance, often for 5-10 or more years; and Avesta Housing, the state’s largest nonprofit housing agency, reports that over 4,000 households applied for one of their affordable homes in 2018, but only 373 received help: 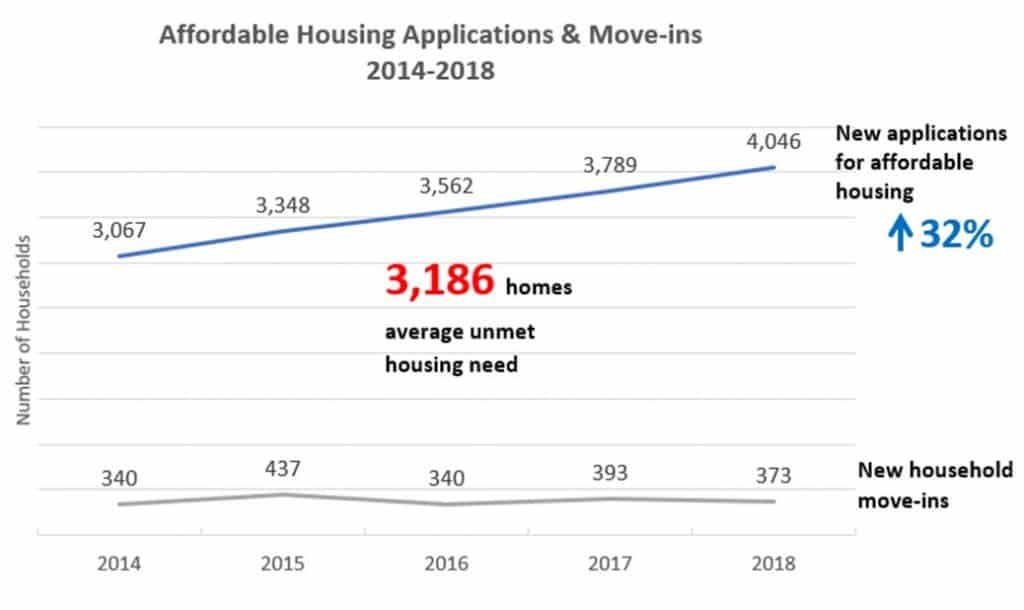 Additionally, recently released American Community Survey data reveals that more than 35,000 renter households, spread throughout all areas of Maine, are severely rent burdened – that is, paying more than half of their incomes for rent and utilities.

While Maine is experiencing this widespread, unmet need for affordable homes, the annual rate of production of new affordable housing units is only about 250 statewide.

How Affordable Housing is Financed

In Maine and across the country, affordable housing development is primarily financed through the federal low income housing tax credit program (LIHTC), conceptualized as a public-private partnership that has found great success and bipartisan support since it was passed in the 1980s. While so-called “9% credits” are a limited, oversubscribed federal resource that flows to Maine each year based on population size, there is an unlimited supply of “4%” low income housing tax credits available from the U.S. Treasury to increase the supply of affordable housing. However, those 4% credits, which generally cover about 35% of the cost of a typical new affordable housing development, are only available if the state puts some of its resources on the table as well. The graphic below shows the difference between the two types of credits and how they are used to finance affordable housing: 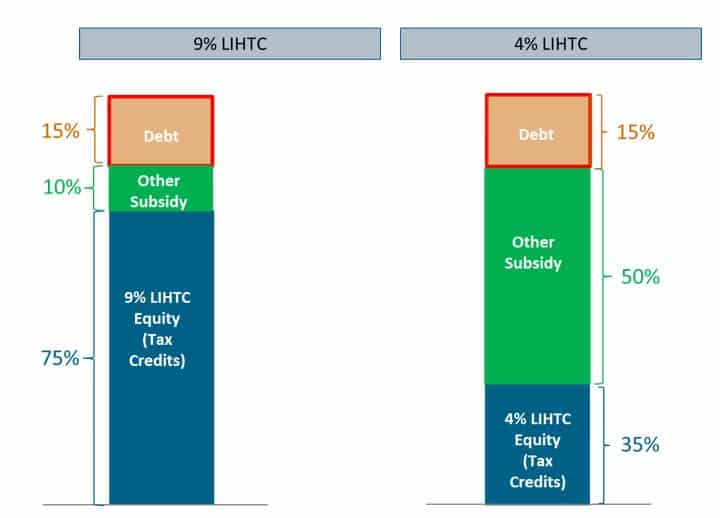 The key to making affordable housing development feasible under either scenario is finding the “Other Subsidy” shown above in green. While the 9% LIHTC is more valuable and requires less additional subsidy, its availability is limited by design and will only support the annual production of about 150 new housing units in Maine. The 4% LIHTC is less valuable than its 9% cousin, but is an unlimited resource to be leveraged by states that can find the resources to fill in the other subsidy required.

Over a dozen other states (including Vermont, Massachusetts and Connecticut) have adopted successful state affordable housing tax credit programs to help fill the financing gap in projects that utilize federal 4% tax credits to build new housing. The Maine Affordable Housing Coalition and its partners in the aging, community development, construction and engineering sectors are now proposing a similar approach through a bill that has been filed at the state Legislature.

Modeled on Maine’s successful and highly efficient state historic rehabilitation tax credit, the proposal would utilize $80 million in state tax credits over 4 years to leverage federal 4% credits. Adding these two resources to the modest loans and grants already available to housing stakeholders would allow more than 1,000 affordable homes to get built or preserved in Maine over 4 years – a doubling of the state’s annual production of affordable housing. At the same time, it would create jobs and critical economic activity statewide in the construction, engineering and design sectors.

The initiative sets aside 10% of the credits to preserve some of the nearly 2,500 affordable homes located in rural communities throughout Maine, which were originally financed 40 years ago by USDA Rural Development but are now at risk of losing their affordability restrictions.

The proposed program would allow individuals or corporations to invest in the development or preservation of affordable housing, in return for a refundable credit to apply to their state income tax obligations. The credits would be administered by MaineHousing.

The bill, sponsored by Assistant House Majority Leader Ryan Fecteau, is titled “An Act to Create and Preserve Affordable Homes for Workers, Seniors and Rural Communities” and is expected to be referred to the Taxation Committee later this month.

This entry was posted in Advocacy, Member Articles. Bookmark the permalink.