MEREDA Index comes in at a healthy 91 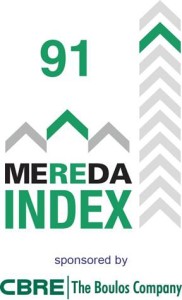 Last week, the Maine Real Estate & Development Association, announced that the latest MEREDA Index had achieved a healthy 91, indicating that as Maine sales continue to achieve high water marks for sales prices and square footage sold, there will be strong fluctuations from release to release. The MEREDA Index is an economic metric that measures the health of Maine’s commercial real estate market twice annually relative to pre-recession 2006 levels.

The previous MEREDA Index numbers came in at 100 and 110, in the fall and spring of 2015 respectively. Previous to that, the four MEREDA Indexes completed to date, between spring 2013 and fall 2014, had not managed to top 80.

“While the MEREDA Index appears to have dropped from the previous two releases, that relates to the effect of the three large transactions — One and Two Portland Square and 100 Middle Street, all in Portland — primarily felt in the commercial component of the Index and, more specifically, square footage sold. However, the actual dip in commercial exclusive of these very large sales was small. The residential component was a primary positive driver; sales of existing homes and new mortgage originations both saw strong increasing trends,” said Michael O’Reilly, Senior VP at Bangor Savings Bank and MEREDA President, in making the announcement.

The Index has risen 5.2% over the past year, but the past six months have seen a more modest 1% growth, led by a very strong performance in the residential sector. This is as expected, as slower growth in the first and fourth quarters compared with the second and third quarters has become a common theme.

The commercial market component of the Index, which represents fifty percent of the total, suggests a slowing in this sector, up only point five percent over the past year and down slightly over the past six months. The volatile square foot sold and leased measure and the average sales price are the weak points.

The residential market comprises 40% of the Index. This is where we see double-digit growth in the three of the four components over the past year, leading to a strong 13.2% growth in the residential index. Residential permits are up 14%, mortgage originations are up 37%, and existing unit sales are up 17%. The median price index continued a steady climb, now at 95% of the 2007 peak, but the rate of growth in this index is usually the slowest of the residential components.

The construction component of the Index is 10% of the overall whole. Here, construction employment has been the slowest changing components of the Index, up only 12% since its lowest level in the first quarter of 2001 and still 14% below the 2006 level. That said, this report shows a fairly strong showing over the recent stretch, up 3.7% over the year and up 3.4% over the past six months.

“The lack of existing housing stock is driving demand for new residential construction in both the single family and condominium market,” said O’Reilly. “While the construction industry continues to deal with a workforce shortage, the construction component of the Index is exhibiting a gradual rise.”

In fact, the construction component of the MEREDA Index is now at its highest since 2008.

“In the past we have seen growth spurts in construction in the hospitality, senior housing and condominium markets, and the latest spike is in residential apartment building construction,” concluded O’Reilly.

Learn more about this important metric of Maine’s real estate economy by watching the video on our website.