The Right Equation for Responsible Development: Spotlight on The Press Hotel 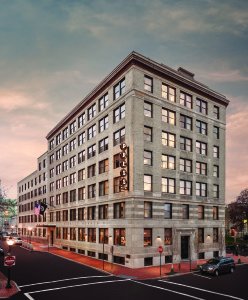 In the first of a 6-part series exclusive to the Maine Real Estate Insider, we’ll provide an up-close look at the most notable commercial development projects of the past year that are helping to fuel Maine’s economy in terms of investment and job creation.  MEREDA is proud to recognize responsible development based upon criteria including environmental sustainability, economic impact, energy efficiency, social impact and job creation.  Please join with us in celebrating The Press Hotel.  A conversation with developer, Jim Brady, Brady Enterprises.

Jim Brady:  The Press Hotel is Portland’s first lifestyle boutique hotel, located at the corner of Congress and Exchange streets, directly across from City Hall. It consists of 110 luxury rooms, the Inkwell Bar, the 73-seat Union Restaurant and an art gallery that showcases local artists.  It sets itself apart from other hotels in the city by the way it tells the story of the historic Gannett building, former home of the Portland Press Herald offices and printing plant. The interior design elements include typewriters on the wall, type letters and headlines “dripping” down the corridor walls onto the carpet, and the large scale that was used to weigh enormous rolls of newsprint. It retains many original architectural details, including the original staircases and banisters, as well as vintage exterior lettering.

The project itself was complicated. The financing structure was extremely complex for a variety of reasons, partially because as an adaptive rehabilitation of an historic building in an historic district, we were eligible for both state and federal historic tax credits. New Market tax credits were involved, as well, and then the IRS changed its regulations during the lead up to the closing, which caused a restructuring of the entire deal.

Jim Brady:  We really wanted to create a differentiated product that would offer a unique experience for each of our guests; an experience that highlights the best of Portland’s exciting food and arts scene while honoring it’s valued past. We wanted to present a truly new and innovative hotel experience.  We accomplished this by assembling a fantastic design team led by Stonehill & Taylor, an internationally-recognized interior design company that collaborated with Maine-based VIA Agency to tell the unique story of the building’s history.

MEREDA:  That sounds like quite a process. How long were you in the planning stages before construction started?

Jim Brady:  We put the building under contract in July 2012, and construction began in January 2014, so just about 18 months. The permitting process went relatively smoothly because we were seeking approval for an adaptive reuse of a well-respected historic building in the Congress Street historic district with no major exterior changes. Construction lasted about 16 months, and the hotel opened in mid-May 2015.

Jim Brady:  The most challenging aspect was the complex financing structure. There was certainly a learning curve while working within the constraints and limitations of the three varied tax credits.

MEREDA:  Something unexpected you learned along the way was …

Jim Brady:  That so many former Portland Press Herald employees contacted us throughout the process … and still do … to say how pleased they are that the building and its history has been so thoughtfully revitalized and honored. The stories they’ve shared continue to form the story that is The Press Hotel.

Jim Brady:  The Press Hotel celebrates the history of the Gannett building and it’s publishing history, which our guests, as well as residents of Portland, truly appreciate. The hotel draws people from the Old Port to upper Exchange Street and Congress Street.  It’s a destination for locals and guests alike.