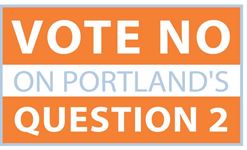 A dangerous ballot initiative will be voted upon on November 7 in the City of Portland.  Question 2 asks whether voters support a change to the City Code to give veto power to a small minority of registered voters, in fact, only 25% of the residents living within 500 feet of a proposed zoning change or zoning map amendment can sign and submit a petition and stop the zoning change.  This can happen no matter how supportive the majority of the community might be for the change, and it can happen with no public process.

Portland ballot question 2 is bad policy, bad for Portland and bad for Maine.  MEREDA does not want this policy to become adopted in Portland or to spread to any other municipality.  The reasons for this strong opposition are several.

First, handing veto power to a minority of registered voters who just have to sign a piece of paper that can be circulated in secret is not how democracy works.  This is an affront to our system and a dangerous precedent to be set.

Second, while the language of Question 2 claims to allow resident participation, it actually limits participation to a self-selected few. If Question 2 passes, a small group of residents would be able to block new housing and economic development with no public notice, no public meetings, and no opportunity for any vote.

Third, due to the City Charter, if this passes we will be powerless to change or amend this dangerous ordinance for five years.

Question 2 would cost significant job growth.  For example, it would apply retroactively to this past May.  That means it could undo the zoning changes approved for the cold storage facility on Portland’s waterfront and other significant projects in the city.  The loss of the cold storage facility would result, immediately, in the loss of nearly 1,000 new jobs and a $171 million economic boost on Portland’s working waterfront and would inevitably lead to the loss of many more in the months and years to come.

This will cause an insurmountable chilling effect on investment in Portland.  Indeed, investments will dry up – in new business, in key infrastructure and housing including affordable housing, market rate apartments and single-family homes.

MEREDA is actively participating in OnePortland, the campaign to defeat this dangerous initiative.  We urge you to encourage any voters in Portland to VOTE NO on Question 2 on the Portland City ballot.

This entry was posted in Uncategorized. Bookmark the permalink.