Solar Plus Complementary Technologies Leads to an Economical, Sustainable Grid 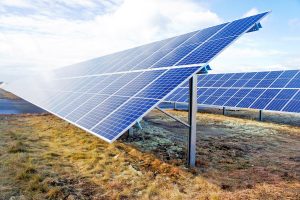 MRRA microgrid at Brunswick Landing in Brunswick ME by ReVision Energy

Thanks to over a 75% decline in the cost of solar panels over the last ten years, it’s now economically viable (and environmentally necessary) to fully power our modern society with clean energy. However, solar panels alone don’t get us out of the climate bind – we must also convert loads that have traditionally been met by burning oil or gas to use electricity instead. This concept – converting to a 100% electricity-powered world – is called strategic electrification.

Common wisdom has been that certain needs – transportation and home heating, for example – could only be met by burning of fuels. Thanks to modern heat pumps, heat pump water heaters, and electric cars, this is no longer the case.

Maine currently spends over $5 billion annually on heating oil and gasoline, at a tremendous cost to our local economy and environment. With strategic electrification, we can keep more of these energy dollars at home and do our part to mitigate carbon pollution.

The Case for Solar Plus

Converting to these all-electric options without also cleaning up the electricity mix misses the mark. The current electric grid is antiquated – it’s too large, too centralized, and too inefficient. Adding massive infrastructure and huge, remote power plants made sense in 1950, but not in 2018.

A future-ready grid takes into account that most people in the near-future will be producer-consumers, making some power and consuming some power. Deployable resources like electric vehicles, batteries, and even water heaters can help balance the intermittency of renewable energy. Furthermore, combining the economics of solar plus these new electric technologies unlocks a much more substantial ROI for the consumer.

Solar photovoltaic is now the least expensive form of electricity on the planet – in most parts of the United States, including the Northeast, a homeowner, business, or organization can buy solar for less per kilowatt-hour than the traditional utility grid.

To the end user, the electric grid looks easy – turn on a light switch and Bam! there’s power. There is a tremendous amount of technical work behind the scenes, however, ensuring stability of service. Critics often cite the intermittency of renewable inputs as a strike against their ability to be taken to scale, however, understanding the possibilities of load balancing and demand response quickly quashes this criticism.

With our current grid, demand response is already in play, but it is generally only used on the large scale. For example, large, industrial customers are often incentivized to lower their usage during peak hours.

Modern electronics make this feature available to everyone. With current, readily available technology, it’s no harder to turn off 1,000 water heaters than it is to turn off a paper mill. This allows grid operators to think more creatively about how to balance grid stability in a fully electrified context.

From the consumer’s perspective, the heat pump water heater is a way to reduce nearly 300 gallons of oil use in their home each year. However, from the grid operator’s end, it’s part of an expanding, integrated network of smart-devices that help manage an internet of energy.

Strategic electrification offers major opportunities for grid operators, end users, and all of society. Converting to a 100% clean energy grid is imperative not only for the sake of the planet, but also for its powerful economic incentives.

This entry was posted in Business, Member Articles, People. Bookmark the permalink.