The Right Equation for Responsible Development: Spotlight on The Lofts at Saco Falls

In multi-part series, exclusive to the Maine Real Estate Insider, we’ll provide an up-close look at the most notable commercial development projects of the past year that are helping to fuel Maine’s economy in terms of investment and job creation.  MEREDA is proud to recognize responsible development based upon criteria including environmental sustainability, economic impact, energy efficiency, social impact and job creation.

Please join with us in celebrating The Lofts at Saco Falls.  A conversation with Nathan Szanton.

Nathan Szanton:  The building has a fascinating history.  The first part of it was built in 1842 by the Saco Water Power Company, to manufacture machinery for cotton spinning and weaving.  In 1867, another wing was added to expand manufacturing capacity.  These buildings were home to some of the most talented machinists in the United States throughout the latter half of the 19th century and first half of the 20th.  During that time, through mergers and acquisitions, the company’s name changed to the Saco and Pettee Shops and then to the Saco-Lowell Shops.  It was not until the mid-20th century that Saco-Lowell Shops sold the building and ceased building textile machinery there.

The goal of our project was to adapt this rugged industrial space to state-of-the-art rental housing for the 21st century.

Nathan Szanton:  There were several major impetuses.  These included: 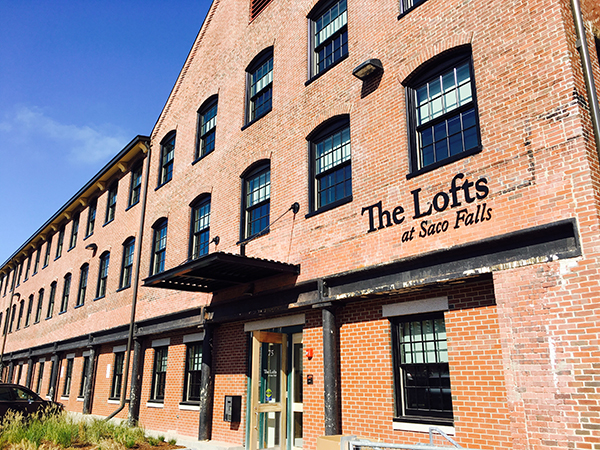 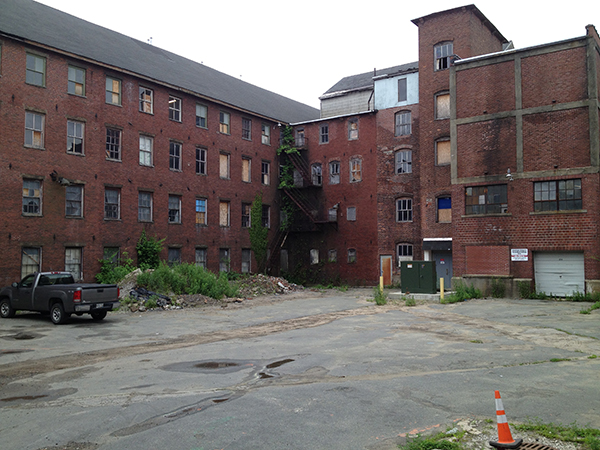 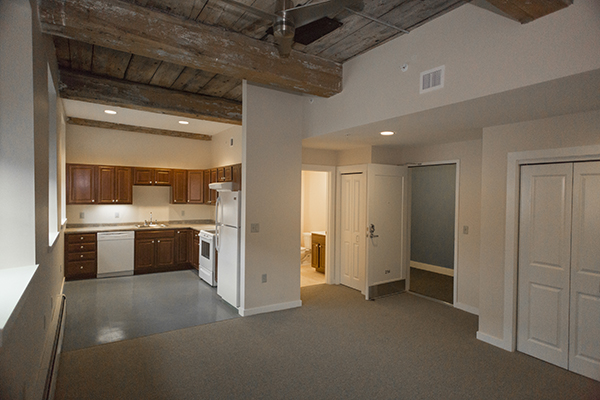 Nathan Szanton:  Obtaining an allocation of affordable housing tax credits from MaineHousing is always very challenging.  There is much more demand for these credits than supply of them.  This project was no exception.

Probably even more challenging than that, however, was negotiating the complex arrangements we needed with neighbors.  This project is in a mill district whose properties had at one time all been under common ownership, but whose ownership had fractured over time into smaller and smaller parcels.  As a result, these parcels had shared utilities, common walls, cross-easements, etc. etc.   We had to sort out 35 easements and cross-easements with our neighbors, deciding which ones to keep, which to modify, and which to discard.  Sometimes we and our neighbors didn’t agree, so there was a lot of talking, a lot of negotiating.

Nathan Szanton:  That at one time, part of the complex system of water works that channelled water to power the Biddeford mills included a canal that ran right through our dooryard and under our building!  It was designed and built to bring water to feed the turbines in mills further from the river than ours.  We have historic photos of it running under our building, but the only physical sign of that canal which remained when we purchased the property is a huge brick arch embedded in the exterior wall of our building.  That arch used to be the ceiling of the canal as it passed under the Saco-Lowell Shops on its way to the Lincoln Mill and other Biddeford mills.  It’s now in the wall of our Community Room kitchen!

Nathan Szanton:  The historic character we were able to retain in the renovations, including enormous overhead carrying beams, giant exposed columns, original hardwood floors in the elevator lobbies, and wainscoating from the old executive offices which are now in some apartments.  Our Community Room contains two wonderful artifacts from the mill: an enormous mahogony chest of drawers used to hold machine parts, which we call Old Bessie; and a bull wheel from the 1840s used in a pulley system that raised and lowered heavy machines and machine parts through the building in a time before freight elevators.